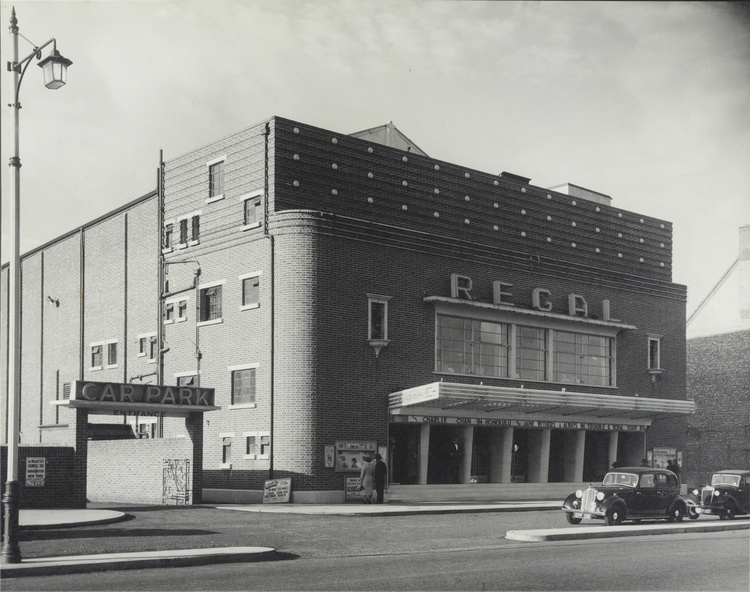 Walton’s Regal Cinema opened at this site in March 1938, just around the corner from the Capitol on Walton High Street, which was later to become the Odeon and is now Everyman.

Many of the Regal's historic souvenir programmes reveal its intricate interior designed by Mollo and Egan. It had carved panelling, a decorative band around the ceiling, and backlighting, all around a large stage, stalls, upper circle and orchestra pit containing an organ. There was even a large restaurant within the building, for visitors to use.

Along with the Capitol, the cinema was managed for many years by well-known Walton local and ‘pioneer of the silver screen’, Clifford Spain. He kept detailed scrapbooks, each one containing letters, programmes, newspaper cuttings and photographs covering his time at both cinemas. Spain often went to great efforts to advertise new films by re-creating realistic scenes from them on the roof. Throughout Spain’s many years managing the cinema, it witnessed and played its part in significant national events such as the crowning of Elizabeth II in 1953. As the first Coronation to be televised, the Regal had showings of the event on the big screen, and illustrated invitations to the evening are preserved in Elmbridge Museum’s collection.

Having been sold to Associated British Cinemas in 1943, the Regal underwent a name change to ‘ABC’ 20 years later in 1963. It was eventually closed in 1971, later being demolished when Walton underwent significant redevelopment.

The site of the Regal cinema is now occupied by Explore Learning. Visit the building to see the heritage trail panel.