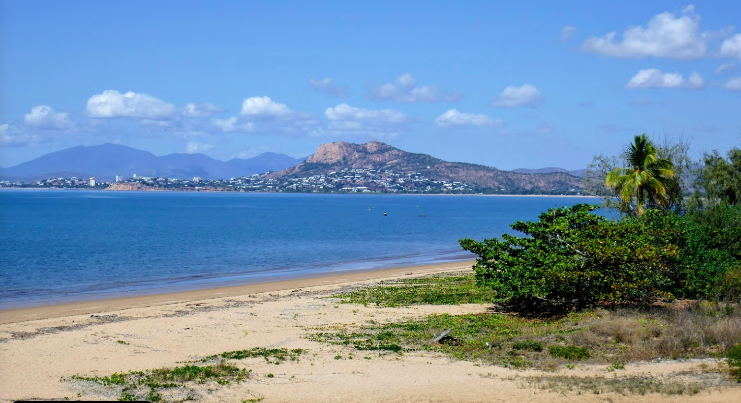 A great place to come and have a look for shells and intertidal marine life at low tide. Make sure you are wearing closed toe shoes though, because there are sharp rocks and poisonous stone fish around that you don’t want to step on!

From here, you can look to the right and see our big Castle Hill that we know is pink because of the potassium feldspar in the granite! Look out in front, and you can see the beautiful magnetic island! Magnetic island is also made of granite, and it is slightly younger than Castle Hill. It is about 275 million years old. Like Castle Hill, Maggie formed by cooling below the surface, and then was uncovered by the erosion of all the surrounding rocks. Not too long ago, you used to be able to walk to Magnetic Island from here. In fact, many indigenous people did walk across, up until about 8000 years ago when the sea level began to rise.

As you probably know, sea level rise is occurring at the moment due to a human caused climate change. What you might not know, though, is that sea level has risen and fallen many times throughout earth’s history. This was also because of climate change, however, these changes took place over thousands of years, and were caused by natural phenomena. Modern climate change is different because it is occurring much more rapidly, and, is a result of human activity.

The amount of greenhouse gasses there are in the atmosphere determines how hot it is. In the past, about 15,000 years ago, there was less gas in the atmosphere, and so it was cold, so cold that there was an ice age. You’ve seen the movie, right? There was so much water trapped in ice at the poles, that there was less water in the ocean. As a result, the sea level was lower, and that’s when you could have walked across to Magnetic Island without getting your shoes wet.

Since then, there has been more and more gas entering the atmosphere, mostly coming out of volcanoes. This gas warmed the earth, melting the ice and causing sea level to rise, turning Magnetic Island into an Island, rather than it being just a big rock like Castle Hill. This has been happening slowly over the last 10,000 years.

Keep your eye out for pieces of coal that may be washed up on the beach. Coal looks a lot like charcoal, however, it is shiny and doesn’t break apart in your hands.