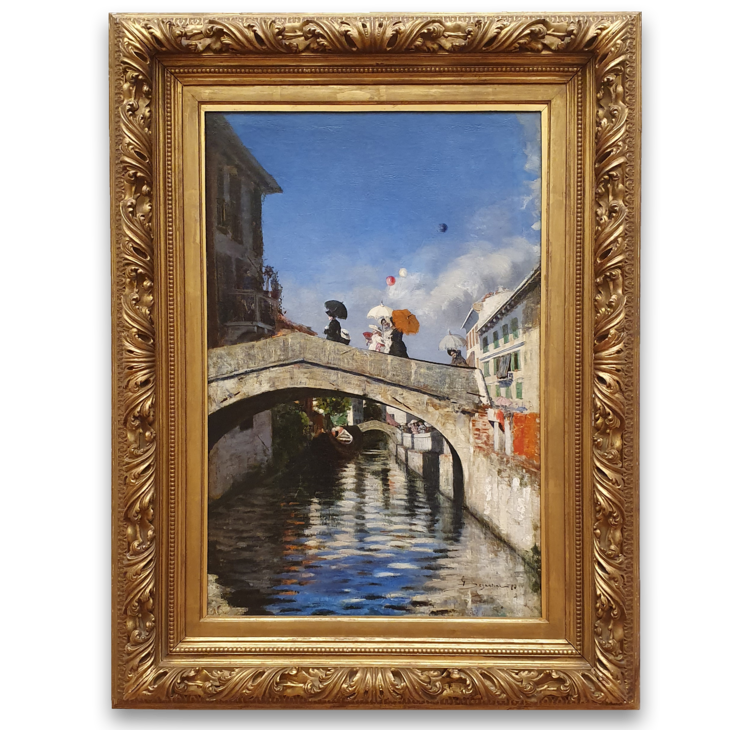 During the 2020–21 winter season, our museum will be able to show its public Giovanni Segantini’s wonderful early work “Il Naviglio a ponte San Marco” , a painting from an Italian private collection. Due to the refined composition of the picture, the richness of color and the liveliness and dynamism of the interplay of light, this work represents an absolute artistic high point in the early creative phase of the 22-year-old painter, who had just finished his training at the Brera Academy and was standing “at the very beginning of a steep career”, says Diana Segantini, Giovanni’s great-granddaughter and profound expert on the work of her great-grandfather. She describes the painting as “a true ray of light in Segantini’s early work, among the otherwise often gloomy depictions of Milan, where he and his partner Bice Bugatti lived in poor conditions near the Naviglio.”

The painting describes a town fair in the picturesque, Venetian seeming, now largely disappeared Milan of the “navigli”, the artificial canals that once connected the city with Lake Maggiore, Lake Como and the Ticino and Po rivers. Festively dressed people, most of them women, populate not only the San Marco bridge, the main architectural element of the picture, but also the right bank and the second bridge in the background. The cheerful mood, which is rather unusual for Segantini, which the neat clothes and parasols as well as the three balloons soaring into the sky convey to us, is reinforced by the sunlight, which shines bright and warm on the masonry of the bridge, the right bank and the house facades on the right half of the picture.

This light in turn owes its intensity not least to the contrast with the shadowy areas on the left half of the picture: the vegetation on the canal bank and above all the dark three-story building in the foreground and its reflection in the water create an effective counterbalance to the bright elements. On the bridge, which connects the sunny and the shady banks, women and girls dressed in black and bright white, while below them, the right bank wall is structured by the rhythmic alternation of light and shadow. In addition to these light-dark contrasts, Segantini also cleverly uses color and shape repetitions as compositional elements: the blue of the sky and the white gradient of the light clouds are reflected in the water, as are the dark and orange house facades on the left bank, whereby the bright orange, the complementary color to blue, finds punctual equivalents in one of the parasols and in the front part of the balustrade on the right bank. Effective correspondences can also be seen in the lines and shapes of the composition: one should pay attention to the arch of the front bridge, which forms an almost closed circle with its reflection in the water. This draws our gaze into the depths of the picture, where a large boat and a second bridge repeat the arch shape.

The painting “Il naviglio a ponte San Marco” belongs to Segantini’s pre-divisionism phase. Only six years later did the artist begin to develop his personal painting technique and through the separate application of basic and complementary colors in fine, long brushstrokes he achieved an ever stronger representation of light in his creations. With its luminosity, however, this early painting, in contrast to the other works from this phase, in which Segantini mostly adopts the dark palette of late Romanticism, anticipates the luminous effects of Divisionism and enables the viewer to experience an intense, unforgettable light experience.