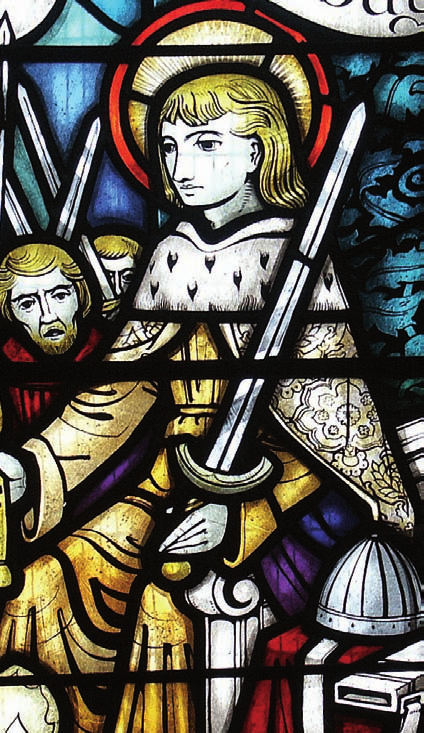 The story and legend or St Edmund, Hunstanton’s most famous visitor can now be explored following this guide and a series of way markers which lead you from the cenotaph in the cliff top gardens to the dramatic cliff top location of St Edmund’s chapel.

St Edmund was born into the Wuffing family (Wuffa was the old English word for a wolf) and was the last of that dynasty which had ruled the Kingdom of East Anglia for over 200 years. He landed in Hunstanton in 855 A.D., and since then Hunstanton has had a long and close association with St Edmund.

The story of his arrival in Hunstanton, his time ruling East Anglia, the dramatic story of his eventual martyrdom at the hands of the Vikings and the legendary appearance of a wolf to guard over his severed head can be discovered following the Hunstanton Wolf Trail.

Hunstanton’s association with St Edmund were celebrated by Henry Le Strange, when in the 1840’s he proposed his new sea bathing village ‘St Edmunds’. As the town quickly grew it became known as Hunstanton St Edmund’s, retaining this name until 1893 when the new council decided to rename the town ‘New Hunstanton’. The connections with St Edmund live on in road names ‘St Edmund’s Terrace’ and ‘St Edmund’s Avenue’ and he is the patron saint of both the Anglican and Catholic Churches.

The Wolf Trail starts at the entrance to the Esplanade Gardens, just a short walk from the town centre. You will find an information board about the story of St Edmund at the start of the trail and the first of six ‘Wolf Trail’ way markers which take you to the site of St Edmunds Chapel, the surrounding gardens and home of the Wolf statue.

Situated in the Wolf gardens at St Edmund’s chapel the beautiful carving of the wolf has been designed by Jean Mulligan an artist/teacher who has a background in community art projects. The sculpture was installed in June 2011.

The Wolf Trail was planned and financed by the Borough Council of King’s Lynn and West Norfolk as part of its participation with ‘In Bloom’.

The content of the trail and photographs have been supplied by and are copyright of John Smith, Hunnyjohn Productions and this audio tour has been developed and narrated by Darren Deans.