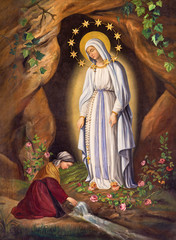 On this occasion Bernadette told everyone how the Lady had called:

No-one could understand what Bernadette was doing. They only saw her kneeling on the ground, and digging in the damp floor of the grotto with her bare hands, scooping up handfuls of mud and throwing them on the side, and then it looked as though she was drinking something. When asked why she had done that, Bernadette could only reply that she had been told by the lady to drink at the spring and to wash in it. Everyone, including Bernadette herself, went home wondering what it was all about.

The next day, however, they saw a spring of flowing water.

[It should be added that water from the sacred spring has since been specially piped to several taps, so that it is available to pilgrims. Pipes have also been connected with the Baths, where pilgrims are able to take a bath - in that same water from the spring.  The Baths are an important feature of Lourdes, as it is at the Baths that miracles have been known to happen].

This time the lady had some instructions for Bernadette, and sent her on a mission. 'Go and tell the priests to build a chapel here'.

Bernadette went to tell her parish priest, Father Peyramale, and told him what the lady had said.  However, he asked Bernadette what the lady's name was and, of course, Bernadette could not tell him, as she did not know it herself.

The lady appeared but gave no message this time.