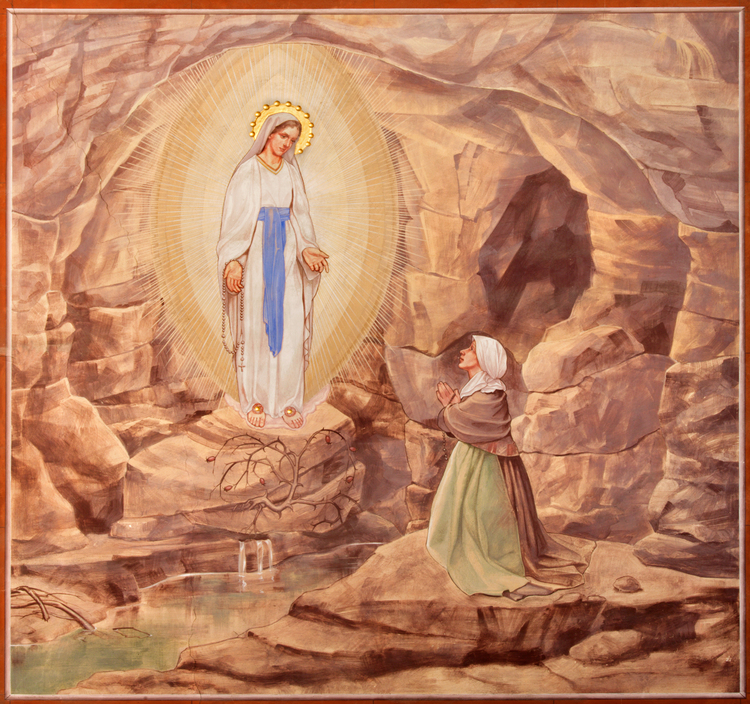 On Thursday, the 11th of February 1858, Bernadette, now 14 years old, was collecting firewood, together with her sister, Toinette-Marie and a friend, Jeanne Abadie.  They had gone to the area just outside Lourdes, known as Massabielle. It was a rather nondescript area, with a scattering of trees, a cave or grotto, and outcrops of rock. It was next to a stream called the Savy. The other girls had crossed the stream straightaway. Bernadette, not wanting to get her stockings and shoes wet, was left behind by herself. She bent down to take them off, so as to be able to wade across the stream. She was just bending down when she heard the sound of a strong breeze, and looked up. Nothing was moving, except a wild rose. Then she made out what looked like a white light, coming from inside the cave. Next though, she couldn't understand what she saw.  She rubbed her eyes, seeing what appeared to be a girl of sixteen or seventeen dressed in white, with a blue ribbon round her waist, and a yellow rose on each of her feet, standing on a small rocky ledge in the grotto. She was holding a rosary of white beads, with a gold chain. Bernadette rubbed her eyes again, then found herself taking out her own rosary which she carried in her pocket because, as she later said, the Rosary was the only prayer she knew. However, she discovered that she could not make the sign of the cross when she tried to. Then she saw the girl in white make the sign of the Cross, and now found that she could do the same.  She started saying the Rosary. At the same time Bernadette noticed that the girl's Rosary slipped easily through her fingers which, nevertheless, stayed still. The girl herself said nothing -- until they came to the 'Glory Be', at the end of each of the decades of ten beads.  At the end, the girl vanished.  Bernadette decided to call her 'The little lady by the water'.

She ran and told her sister Toinette what she had seen, but said not to tell anyone else. At first it stayed a secret, then Toinette blurted it out - and thank goodness she did, otherwise there might have been no Lourdes!  Bernadette's mother didn't like the idea of her daughter having a vision of someone, or some thing - who knows what it was? It might be an evil spirit!  She told her not to go back to the Grotto, but Bernadette pleaded with her mother, who eventually allowed her to return there with her sister.