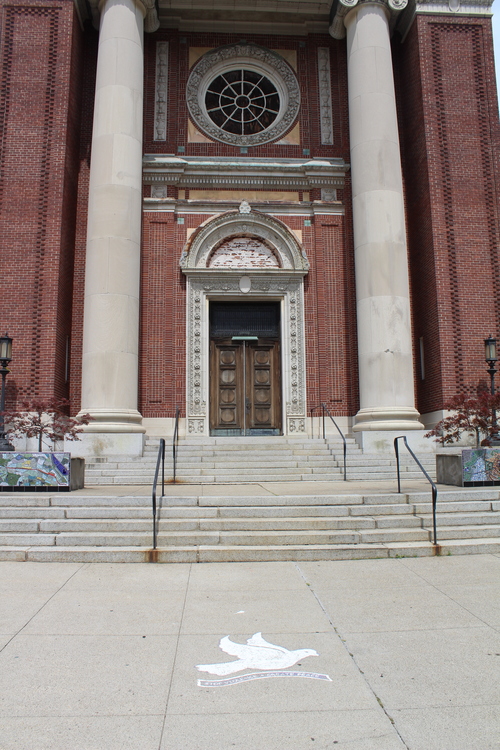 In 2017, Hyde Square Task Force collaborated with local Jamaica Plain artists Richard Youngstrom, Fiona O'Connor and Andrea Tamkin to create the colorful mosaics on the Blessed Sacrament Plaza. Mounted on the two rectangular planters on the church steps, like three-dimensional geometric street maps, are two parts of the installation. On the left is a street map of Boston’s neighborhoods, the Latin Quarter highlighted in yellow in a patchwork of greens and grays; the orange line of tiles represents the Orange Line of the MBTA. On the right is another street map, this one a close-up of the neighborhood. The Stop & Shop is marked by little painted fruits; the MSPCA animal hospital by miniature animal figurines. And in the very center, surrounded by a vibrant grid of streets, is a pop-out figurine of the Blessed Sacrament Church.

The three artists collaborated with Hyde Square Task Force youth, as well as members of the community, to create and install the mosaics in the popular church plaza over the course of the summer of 2017. The mosaics quite literally reflect Boston’s Latin Quarter, and it’s distinctive music, food, colors and sounds. What better way to show it off than on the steps of the beautiful Blessed Sacrament?

To arrive at the next spot on the tour, turn right past the church. Keep walking up Centre Street, past Creighton Street, all the way to the roundabout.