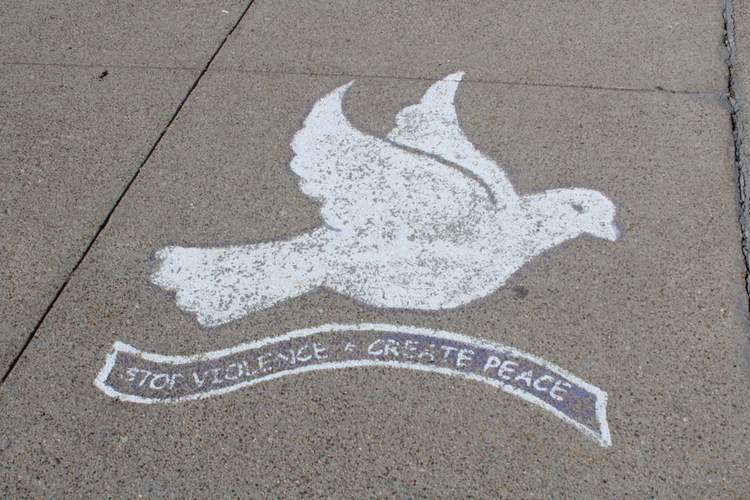 As you walk along Centre Street, better known as la Avenida de las Americas, you might see Peace Doves painted on the sidewalk. They were painted by the youth of the Latin Quarter less than 15 years ago, in the face of street violence that plagued the neighborhood.

Jamaica Plain, including the Latin Quarter, is a very different place today than it was in the mid-2000s. Gun violence was common, and a great many young people of the community were involved in, or victims of, the brutality. Their friends, students and teens involved with Hyde Square Task Force, turned to public art to process and respond to the wave of killings. Sidewalk Sam, a Boston-based street artist, agreed to work with the Hyde SquareTask Force youth in 2008.

The Peace Doves themselves, painted white with purple borders, are scattered up and down Centre Street; you might miss them if you don’t know where to look. The one on the Mozart Park plaza has faded to a ghost, the word ‘stop’ still clear beneath it. You will see more of them as you complete the tour. There’s one on the Blessed Sacrament Plaza, on the corner across from the popular D’Friends Barber Shop, and two more at the bus stop in front of Whole Foods and in front of the Connolly Library; El Oriental de Cuba, at the corner of Paul Gore street, boasts one that still looks as though it might lift off from the sidewalk and take flight.

The Peace Doves bear a message: Stop Violence, Create Peace. Though the young people of the Latin Quarter painted them over a decade ago, when today’s youth were just little kids, this message is still important to see. Neighborhoods in Boston, and across the country, still face the threat of violence on a daily basis. These peace doves are a reminder that young people should have access to the resources they need to help themselves and their communities succeed.

Across the street from the Mozart Park you should see Gondres Bakery. If you head towards the bakery, you will find our next stop on the tour is just around the corner.