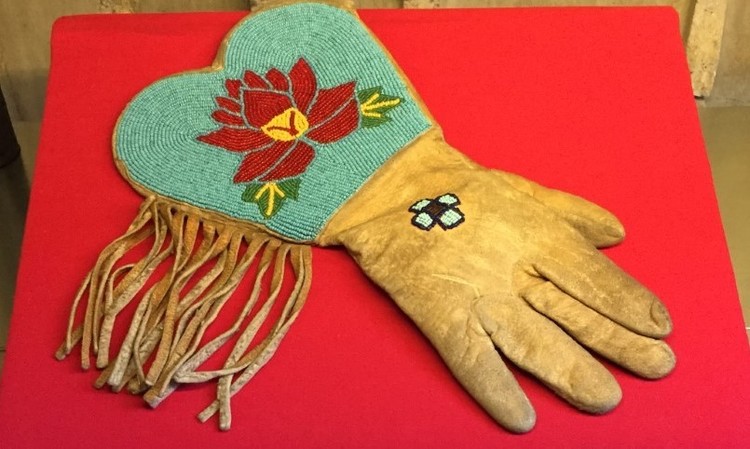 Western Spirit: Scottsdale’s Museum of the West is proud to present a selection of beaded gauntlets from the collection of William P Healey. A renowned and accomplished collector, Healey has assembled important collections of paintings, historical objects, and furniture of the American West. This subset of his collection, unique in its focus, brings together intricately beaded and embroidered gauntlets from throughout the Western United States. It represents almost one hundred years of craftsmanship and artistry.

A gauntlet is a protective glove, often made of leather or hide, with a wide flared cuff. The gauntlets seen here can trace their overall shape almost directly back to military wear. As part of the uniform of Union troops and cavalry scouts, these leather gloves were brought into the American West and were adopted as a symbol of the frontier, passing from military wear into common usage.

As with many things brought westward by trappers, emigrants, military, and settlers throughout the 18th and 19th centuries, the practical leather gauntlets began to be reproduced and adapted for use and sale by Native American artisans. The gauntlets exhibited here have been highly embellished with beaded designs similar to those found on other pieces of decorative work, especially clothing.

Partially because of their association with the Wild West Shows of the late 1800s, fringed and beaded leather gloves became a convenient fashion shorthand to declare one’s affiliation with the frontier. Whether worn in rodeo performances, used as props in photography studios, donned by newcomers to lend an air of western authenticity, or purchased and treasured as souvenirs of an adventurous vacation, fringed or beaded gauntlets were a showy addition that brought a touch of the West to any outfit.

The William P Healey Collection of beaded gauntlets includes examples from tribes of the Plateau, Great Basin, and parts of the Plains regions, comprising areas of what are now the states of Washington, Oregon, California, Idaho, Montana, Wyoming, Colorado, Nevada, Utah, North and South Dakota, and Nebraska as well as the provinces of British Columbia and Alberta.

Likely made for sale, very little information about the original makers and owners of these gauntlets has survived. However, stylistic features and material types have helped identify likely cultural groups of origin and approximate dates of creation. The selection shown in these cases is arranged thematically: floral motifs, geometric designs, human portraiture, representations of animals, and patriotic themes. In each section, you will see a range of both dates and styles.