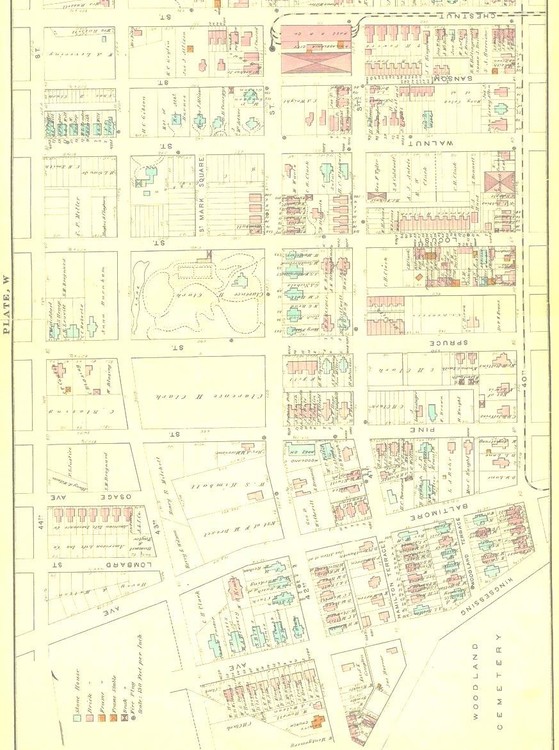 This tour reflects several eras of Dolores Hayden’s suburban typology, showing the diversity of suburban planning and development during the 18th through 19th centuries. It focuses on suburban housing and the related development of parks and transportation. As you traverse space, you will generally traverse time as well, moving from 18th-century through the late-19th and early 20th centuries.

It begins with borderlands suburbs, which were located on the fringes of 18th-century cities. We will visit the Woodlands Estate, an example of such a borderland suburb. The Woodlands also demonstrates the garden cemetery, an early park for.

Next, we move to an example of early and mid-19th century efforts to build elite picturesque enclaves for elite and upper middle class Philadelphians, including many owners and senior managers of industry. We will visit Hamiltonville, but other examples in Philadelphia include Powelton [the 18th c. estate of which is no longer there, although the picturesque enclave is] and Bartram’s Garden. Neither Powelton nor Hamiltonville has the curvilinear streets of the picturesque enclaves in Hayden, partly since they were built at the edge of a big, messy city, where animals were driven into the city along the streets, with commercial traffic in and out of the city on major routes like Lancaster Ave. & Woodland Ave. Yet Hamiltonville and Powelton exhibit most of the key architectural, site planning, and neighborhood development patterns of picturesque enclaves. This tour shows the transition over time in the spatial development of borderlands estates into subdivided streetcar suburb in the Northeastern United States where the Industrial Revolution played a key role in turning colonial cities into global manufacturing centers. Later in the course we will talk about how, as industry left these areas, these cities were left to become vacant and dilapidated. Towards the middle of the course in later walking tours we will also discuss the revitalization efforts to revive these areas.

West Philadelphia also has an abundance of later 19th c. streetcar suburbs built for and occupied by middle class households (not so much the elite and upper middle class for whom Hamiltonville was initially built). These include Spruce Hill (we will see part of this area along 43rd Street), Squirrel Hill, Walnut Hill, Kingsessing beyond Hamiltonville (down the current SEPTA routes 13 34, 36, to the west and southwest).

In West/Southwest Philadelphia were late 19th c. industrial “suburbs in the city” around the large Brill Co. trolley manufacturing plant and at the Fels soap plant down at the end of Woodland Ave., where Philadelphia borders Delaware County at Cobbs Creek. These sites are beyond the boundaries of this walking tour.

Lastly, though not really part of Hayden’s typology or within the bounds of this tour, West Philadelphia also has early 20th century lower-middle class automobile “suburbs in the city” in the neighborhoods of Cobbs Creek and Haddington. These include rowhouses with garages in basements accessed via rear alleyways. Many industrial and clerical workers in early 20th c. Philadelphia could afford to own a home and car, and these housing developments were built for them.