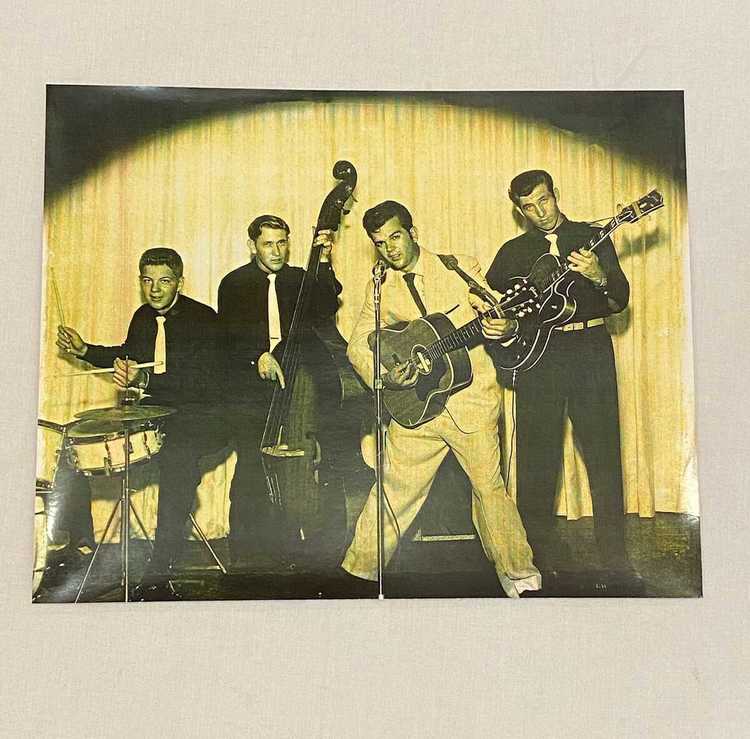 As Rock and Roll developed in the 1950s, Billy Weir was right in the middle of the action. Early Rock and Roll was called Rockabilly, a combination of the words “Rock” from Rock and Roll, and “Hillbilly” which is an old term for country music. Rockabilly music has strong rhythms and often uses special effects to make a repeating echo called a “delay.” Many Rockabilly musicians sing high in a vocal twang like country singers.

Before Conway Twitty, whose real name is Harold Jenkins, became a Rockabilly star, he called upon local musicians to play for his recordings, and he needed a drummer. Billy Weir was so good that Conway Twitty made him part of his new band, the Rockhousers. Billy Weir became one of the youngest professional musicians to go on tour. In his display, you can see a poster promoting the Rockhousers band, with Billy Wier on the far left at the drum set.

When he was only 15 years old, Billy Weir started recording at Sun Records and made it on the list of “Great Drummers at Sun.” He played for Conway Twitty when recording his first hits in Nashville, and he performed with Elvis Presley's band and many other famous musicians.

Later on, Billy Weir learned from famous guitarists like Scottie Moore, and became a skilled guitarist during his career. He has also published memoirs about being a part of the birth of Rock and Roll and his life on the “music highway” between Memphis and Nashville. Currently, he owns and operates his own recording studio known as Gumball Records. In 2011, Billy Weir was inducted into the Rock-A-Billy Hall of Fame in Jackson, Tennessee, the city where he was born. He recently released an album and still performs, sometimes here at the museum at concerts on the front porch of the “Sleepy” John Estes home.