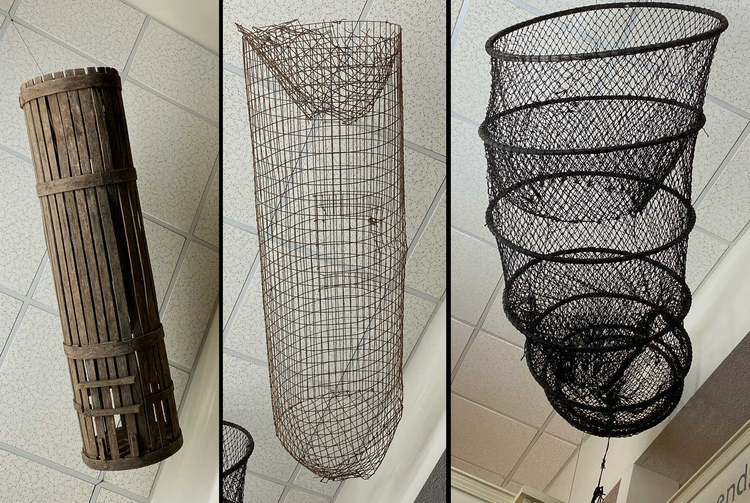 Looking above the fish tanks, you can see three cylinder-shaped fish traps. Though they are made from different materials, they all work in a similar manner. Fish squeeze in through the funnel-shaped mouth that extends into the body of the trap and are unable to get back out. The fisherman checked his traps the next day, and every 12 hours to take out the fish and mend anything broken. They trapped lots of catfish and crappie, though many kinds of fish could be caught.

Wooden traps were made from the 1930s to the 1950s by bracing the round hoops around a pipe and nailing them to long staves. The dusky weathered wood of this trap is shaped like a tube, but the hoops and staves make it look like an old-fashioned barrel.

Wire traps were a little easier to make, like the one seen in the middle. Traps such as this are made from shaped wire mesh fencing. They were common in the 1970s and 80s.

From the 1990s onward, net traps held open with stiff round hoops were used. The black net fish trap has two mouths in order to make trapping fish more efficient. Once the net was made or bought, the fisherman took bait like cheese or bits of fish and put it inside the body of the trap. Then, they found a slow place in the stream where fish would hide and anchored the trap beneath the water with ropes or stakes. The fisherman would note specific landmarks so that they could easily find the trap later on. The mouth end pointed downstream so that things floating down the river wouldn’t get caught in the trap. Fisherman with a net trap could also catch fish by hauling it behind a boat.