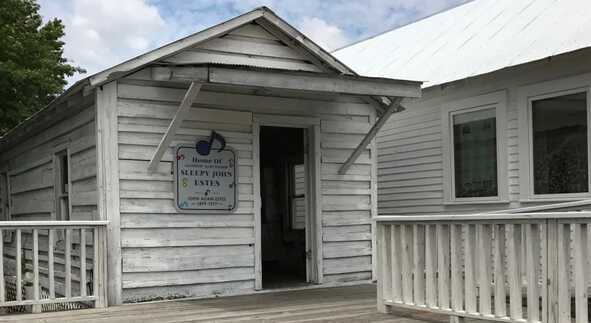 You are standing on the porch of the last home of “Sleepy” John Estes. He is one of the most important musicians who developed blues music in the south. However, for most of his life, “Sleepy” John lived in poverty. You can see here what life was like for his last years. The outside walls of his house are made from overlapping boards of irregular width. Their white paint is greying with age. On either side of the front door, boards jut out at an angle to hold up a small roof of corrugated metal. The small boxy house used to be one room and the front and back door were opposite. It was called a shotgun house because someone could fire a shotgun through the front door and it would go right out the backdoor without hitting any walls.

“Sleepy” John Estes grew up here in Brownsville. By nineteen, he was playing guitar and singing professionally. In 1971, “Sleepy” John told Downbeat Magazine that he got his nickname because he was still working as a farmer: “Every night I was going somewhere. I'd work all day, play all night and get back home about sunrise. I'd get the mule and get right on going. I went to sleep once in the shed. I used to go to sleep so much when we were playing, they called me “Sleepy”. But I never missed a note.” He wrote lyrics based on life in his hometown and sang with a unique “crying” style. In the 1920s and 30s, he made recordings in Chicago and toured around the United States.

In 1941, he came back to Brownsville and began farming. He lived in this house with his wife and five children. When “Sleepy” John Estes lost his sight, it stopped him from farming. He tried recording more music, but nothing paid off. Because of this period of inactivity, the public believed he was deceased.

After twenty years had passed,  people took a new interest in blues music. In 1962, David Blumenthal was making a documentary and rediscovered “Sleepy” John. Immediately, he brought “Sleepy” John back into the public music scene. “Sleepy” John Estes made more recordings, and even toured outside the United States. In 1977, he was here preparing for another European tour when he suffered a stroke and passed away. He is buried in the Elam Baptist Church Cemetery about 15 miles from here. In 1991, “Sleepy” John Estes was posthumously inducted into the Blues Hall of Fame.