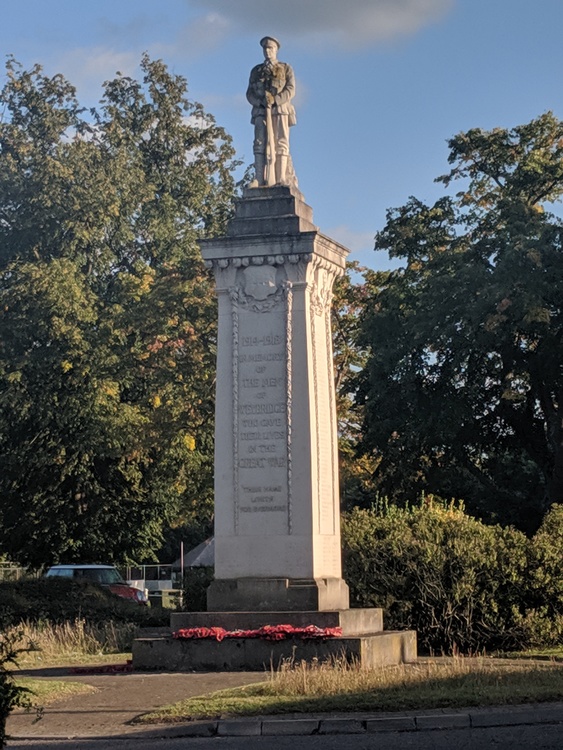 Our next stop is another memorial, but one of a very different kind. As you come to the end of Queens Road, on your way into the centre of Weybridge, you will approach a roundabout where Hanger Hill meets the A317. Standing in the centre of this roundabout is a statue depicting a soldier, with the names of the men of Weybridge who died in the Great War inscribed on the plinth below him. The front of the statue, which you can see if you view it facing Weybridge Cricket Green, reads, "1914 - 1918. In Memory Of The Men Of Weybridge Who Gave Their Lives In The Great War. Their Name Liveth For Evermore".

On the sides of the plinth, divided by year of death, are the names of the 134 men from Weybridge. From the list, it is possible to pick out a number of the same surnames, and it would be reasonable to assume that in many cases these men were from the same families.

One reason that Britain entered into the First World War was to preserve its far-reaching empire, while using the vast resources of this same empire to put a stop to many other Europeam rivals who were attempting imperial expansion. This involved drafting in men from across British colonies to fight both at home and on the Western Front, as well as sending British troops to far-flung corners of the empire to help defend it.

One of the men from Weybridge who experienced this was Private William James Carpenter, whose name can be found towards the bottom of the 1918 section of the memorial. William was born in Weybridge in 1894. He lived with his parents and two younger sisters at 5 Railway Terrace in Heath Road. After finishing his education at St James's School in Baker Street, William went on to work as a printer's apprentice in Weybridge High Street. After the First World War broke out, he joined up to the East Surrey Regiment in late 1915 and was sent to India with the 1st Battalion in May 1916, where they joined forces with the British Indian Army. From there, they were sent to Aden, in Yemen, in February 1917.  Whilst there for a year, William would have defended the British Empire's communication lines through to Europe from Turkish guerilla forces.

A year later in 1918, William was sent back to fight in what is now Pakistan. He was admitted to hospital whilst there, first in Chakrala and then in Agra, back in what is modern-day India. He sadly died of influenza there, in October - a fairly common cause of death amongst British troops fighting in foreign territories across the empire, but possibly also a result of the Spanish Flu pandemic, which saw its peak in India at this time.