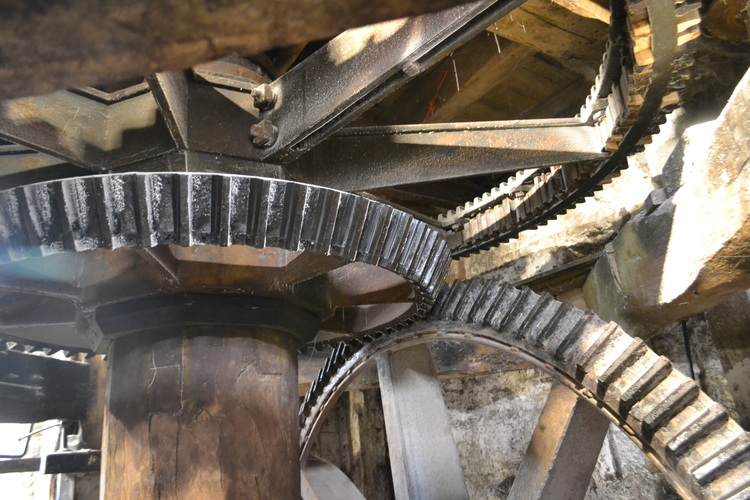 The Hurst Floor and Pit Gears

Here you can see the gears that drive the equipment in the mill, and the individual smaller gears that run the sets of stones, all held in situ in a large wooden frame called the Hursting. The hursting and pit gears are set onto sandstone bedrock.

The large pit gear that is attached to the waterwheel axle connects to a smaller gear called the wallower on the great wooden shaft in the centre of the hursting. This shaft carries the drive up to the sets of stones, which connect via small “stone nuts” to the great spur gear, and also carries power up to the top floor to run the sack hoist and other ancillary machinery.  On the top of the great spur there is a secondary set of teeth called a crown, from which lay shafts can be run with belts to power other pieces of equipment in and around the mill. One of these is now used to power a generator, producing electricity which offsets the electricity costs on the site.

On the outside of the Hursting are the meal spouts which come down from each of the different sets of stones above, where the quality of the flour can be checked as it is being bagged. There are also controls the miller uses to adjust the setup of the equipment to make a coarser or finer flour. Each set of stones has its own tenter-screw to lift and lower the runner stone for a coarser or finer grind, and a crook string secured to a twist-peg, which is used to speed up or slow down the feed of grain into a set of stones, this can alter how long the grain is between the stones, again altering the quality of the flour produced.

The generator is in the old dust room, which was where the chaff from the oat cleaning was collected and blown through a hole in the wall from the inbuilt winnower that was fed by the shelling stones. Underneath the winnower there is a rather unusual looking bit of floor, this is actually an old worn out millstone, which has been turned over and had a plug put in the centre, to infill the eye. It is quite common for mills to use old worn out millstones as flooring.

During milling as each bag is filled it is stitched closed using thread and lifted to the floors above via the sack hoist chain through trap doors in the floor. The hoist is stopped and started by a rope running from the Granary Floor where the chain is wound onto a barrel shaft.

This freestanding winnower was originally used to blow the chaff off grain after it had been threshed in the barn.  It would have originally been made with a geared hand crank mechanism, but was adapted to a direct belt drive, and fixed in the middle floor of the mill where it could be powered by the waterwheel. During the changes of ownership since the last miller retired in 1989 It was moved around as bits of floor were replaced, and belts and shafts were altered, meaning it could no longer be driven by the mill. One of our volunteers has repaired some damage it had suffered, fitted it with new sieves and reconverted it back to a hand crank mechanism so we can use it to winnow grains that still have chaff among them. The set of sieves inside shake from side to side separating the falling grains chaff and bits of straw, while the fan inside blows the chaff out the back, while the cleaned grain rolls down the spout at the front and out into a tray.

This oat roller was probably added to the mill when it began to process animal feeds instead of just producing flours for human consumption. Rolled oats were a very important component of horse feeds; horses continue to breathe in and out while chewing, so can choke on dusty meal, so rather than kibbled or milled grain it is preferable to feed them flattened grains such as rolled oats or flaked maize. To roll oats a higher moisture content is needed than is desirable for long term storage, so they are usually steamed to increase the moisture content and partially cook them these days. In the past they may have rolled the oats before  drying them for animal feeds, or re added moisture over a period of several days in a conditioner if the grain had been dried and stored.

Leave the Hurst Floor by the door you came in to return to the Tail Race platform and Water Wheel, then enter the Drying Kiln through the door on the left hand side.