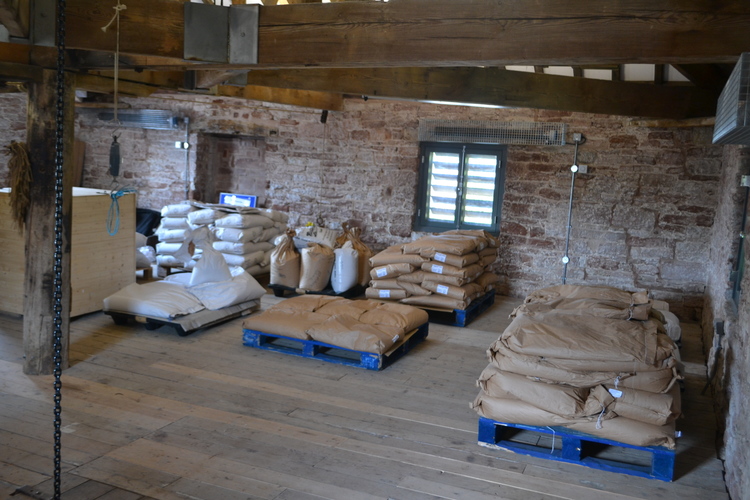 This space was used for storage of grain after it had been dried, and is still used for grain storage today. We have different grain types separated into different stacks, a bit like how in the past, each farmers produce would be kept separately from the others. The farmers would come down to the mill every couple of weeks to collect some flour milled from their grain, while the rest of it remained in storage un-milled.

Dried grain can keep in storage almost indefinitely if it is clean and kept dry, whereas in damp old farmhouses flour only keeps for a short time before growing mould and has insect life take up residence in it. The storage space for grain at the mill was designed not only to keep the grain dry, but also to make sure that the tenant farmers didn’t take their grain anywhere else to be milled. Since the Norman conquest of England it was made law that the peasant tenant farmers of the land had to take the grain they grew to their lords mill, and nowhere else, to be milled, ensuring that he could take a Tithe for having it milled.

This Mill was owned by the Corby estate, when lord Howard bought it in ruins from another local lord after it was damaged in a Border raid. The lord of the manor owned the mill, and the miller was a tenant who paid him rent. The lords could fix the price they charged for milling grain wherever they wanted without fear of losing customers. After the flour had been milled the fine white was sieved out of it, and the lord of the manor took a cut from that too. This way the mill owners made a vast income from the peasants producing grain on their land; with the millers generally seen as being complicit.

Leave the Granary Floor by the stairs and exit the Stone Floor to the Loading Dock and Head Race.