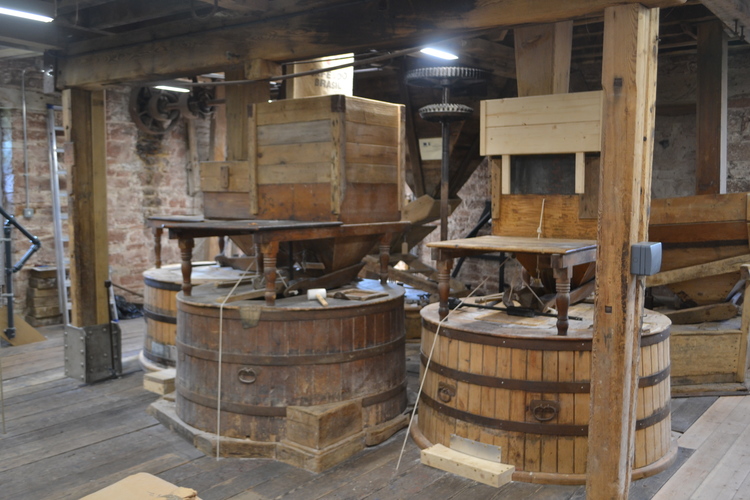 The Stone Floor and Mill Stones

On the Stone Floor there are 5 different sets of millstones, which all do slightly different jobs - two for milling oats, 2 for milling wholemeal flour and 1 for milling flour to be sifted into white flour.

Firstly there are the two sets of Oat stones, which are relatively soft millstones for processing soft grain types, like oats and barley. Until around the eighteen fifties, oats were the staple grain eaten in the north west, as a variety of wheat that could ripen in this cool damp area had not yet been developed. Firstly the oats are put through the Shelling stones, a lightweight set of stones, set fairly wide apart, that gently rub and roll the grain about without breaking it open to loosen the husk off the outside. Unlike wheat, oats are very well attached to their chaff and so need to be shelled before they can be milled into flour.

There is a very large hopper in the granary floor above, to feed the oats down to the shelling stones. As the shelling stones were set quite wide apart and weren’t actually milling the grain to make flour they could process grain very fast, hence the need for such a large sized hopper to keep them supplied with grain throughout the day. The shelled oats fall to the hurst floor below to be passed through a winnower to remove the chaff.

After shelling and winnowing, a grain elevator near the office door takes the oats up to the granary floor above the stone floor where they are fed back down into the second set of stones. These are a set of dressed milling stones, with furrows cut into the surface to help shear the grain open before it was ground, and small dimples known as pecking on the lands in between.  The combination of both of these dressing styles on the same stone is thought to be quite unusual. These stones are mismatched pairs, the runner stones are made from millstone-grit, but the bed stones have been cut from Lazonby sandstone, which is very rarely used to make millstones in the UK as there is very little sandstone in the country that is hard enough. The oat flour from here was sent to a sieve on the floor below which could separate out the coarse, fine and bran from each other, and was used to make Haverbread, the local staple flatbread, which is not dissimilar to Staffordshire oat cakes.

The mill also had the capacity to turn shelled oats into rolled oats via the Hopkinson oat roller on the hurst (bottom) floor.

Towards the middle of the room there are another 3 sets of stones, which are much harder, and are used to process harder grain types, such as wheat, spelt and rye. We have one set of natural French burr stones, which were used for making white flour as they leave the bran in fairly large flakes while grinding the white quite fine. This makes it easy to sieve the bran off with the flour dresser (a type of sifter). These stones were cut in separate pieces like a jigsaw puzzle from a quarry near Paris, and were loaded onto empty grain ships as ballast for the journey back to the UK. Once they were delivered to this country the stones were assembled at the dockside bound together with iron bands, and had a layer of plaster of Paris added to the back to help improve the structural integrity. They were then transported whole across country to whichever mill had bought them. Ours were assembled at Liverpool docks by a company called Davies and Sneade.  French stones were roughly three times more expensive than a set of English Millstone grit stones, but as many mills were making a good profit in the late 19th century even a lot of the smaller mills were able to afford a pair.

The last two sets of stones in the milling room, are both French burr stones that have had their working surfaces rebuilt with a layer of Carborundum, which was added like a cement and then left to cure. This was sometimes done when a set of stones was nearing the end of their useable life as in the nineteen hundreds the mills became poorer, and often could not afford to replace worn out stones. Carborundum is a very hard substance which is usually used to make whetstones and grinding disks. They are very hard and very abrasive, and can grind the bran almost as fine as the white flour in the centre of the grain. One of these sets has seen little use, the stones are still very thick, and weigh somewhere in the region of three quarters of a ton each. These stones were not refaced, because they had worn down too much, but were likely done in the early 20th century as the Carborundum coating was the preferred surface for processing animal feeds. The set that we are using to produce wholemeal flour are quite a bit thinner, and weigh around half a ton each.

Grain is poured down from the floor above into the hoppers above the sets of stones, where it is then sprinkled into the sets of stones by the wooden “Shoe” underneath the hopper. The flow of grain is regulated into the stones by the turning damsel; (a metal shaft attached to the top of the runner stone and knocks the shoe to sprinkle grain in 4 times for every single turn of the runner stone) and by the tension of the crook string which lifts or lowers the open end of the shoe to speed up or slow down the flow of grain. The grain enters the stones through an eye cut in the centre of the runner stone, and is pushed outwards through the stones as it is ground to flour. It is then swept around inside the wooden casing, until it drops down through the floor to be bagged downstairs.

The filled sacks of flour are then attached onto the sack hoist and brought up either to the stone floor here, for short term storage before they are split into smaller bags for sale, or transported to the top floor to be tipped down into the flour dresser, and sieved to make white flour.

Next, proceed up the stairs to the Granary Floor above.