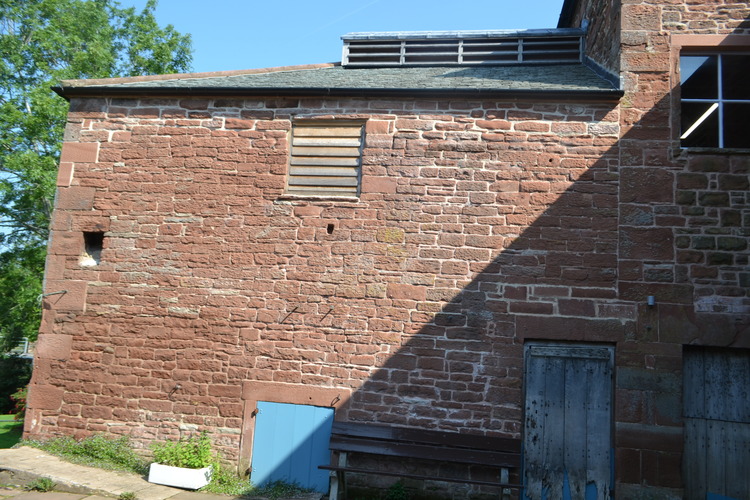 The Drying Kiln and Life at the Mill

All the corn mills in the north west of England, Wales, and Scotland had drying kilns as the climate here is much wetter than to the south and east, and as such it is nigh on impossible to get a harvest in that is dry enough for long term storage. If put into storage damp, the grain would soon go mouldy. So each farmer in turn would fetch their sacks of grain to the mill at harvest time, and the sacks would be emptied out onto the drying floor, consisting of cast iron tiles, where they would be slowly dried over the firebox below. The fire would have originally been fuelled with peat, cut and dried on the fell-side, but in its latter years was run using coke.

There is a large metal plate above the fire box which spreads the hot smoke out towards the sides, so that the heat is distributed more evenly, rather than having a hot spot in the middle of the kiln. The grain would have to be turned and moved about with a wooden shovel or paddle, to ensure it was all evenly dried, before it was swept off the kiln and re bagged before being sent up to the granary floor of the mill for storage.  There is still a little of the staining from the smoke visible on the wall, but most of it has now gone after the kiln spent several years with no roof. This was the first part of the building to be repaired back in 2016 and 17, as emergency consolidation works.

The Millers at Warwick Bridge have lived in various different buildings on the site over the ages. Brookside the large Bed and Breakfast opposite was built in eighteen fifty three, with further works in eighteen fifty four, to house the miller and his family. The two date stones feature the Howard coat of arms on one (badly eroded), and the Howard lion on the other. Millers were well off at this point, and the miller's household at the time consisted of 4 family members, 4 servants, and one “boarder”, a 10 year old girl. Before that it was likely that the millers would have lived in the building that now functions as our Toilet block, the Bed and Breakfast laundry room and storage space.  You can still see part of the chimney for the Kitchen range in the Disabled Loo, the footings for which were made directly onto sandstone bedrock, buried several inches below the current floor.

The most recent onsite Millers residence was named Millers Cottage, next door to Brookside. It was initially built as a barn as part of the mill complex, and later run as the village shop by a family of millers called the Eckerslys, before being converted to a house in the nineteen twenties.

Proceed from the Drying Kiln to the Stone Floor on the same level.