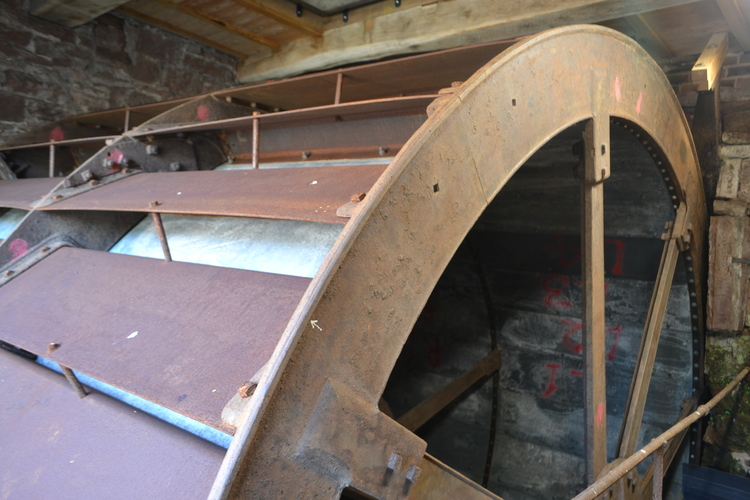 You are outside the Mill at the front of the site, standing on a stone platform in front of the water wheel and over the tail race.

The tailrace itself runs out under this platform, taking the water away from the mill wheel, and back to the main beck. The stonework of the tailrace was in fairly poor condition after spending many years permanently damp and enclosed, with a timber and corrugated tin sheet warehouse built over it for storage sometime in the early nineteen hundreds; so over 80 new stones had to be cut and dressed and fitted into the wall before it was all repointed during the restoration works.  Before the current yard and retaining wall were built, there was a set of steps at the south side of the wall giving access to the watercourse. The bottom step has a large hole in it, and is in fact an old millstone, that was almost certainly from one of the previous phases of the mill.

This is where the local farmers came to collect their grain after it had been milled, it was covered with a small timber outbuilding, so the miller could leave sacks here for collection when he wasn’t here, without risk of them getting rained on.

There have been various different mill buildings here over the ages, the first one appearing in written records in 1169. It has been rebuilt, extended and improved numerous times since then, with major rebuilds and refurbishments recorded in 1804 and 1839. Here you can see an example of the varying ages of the different buildings on the site; for example the drying kiln building is butted up against the older mill building. It is evidently the younger of the two as part of its doorway is in-fact the old external wall of the main mill building.

Here you can also get a great view of the waterwheel, the power source that still runs the traditional milling equipment inside. This wheel is 14 ft tall, a fairly common size, but is unusually wide, at 10 feet. This means it can hold a much higher weight of water than the wheels of any other mill in the county, delivering more power to run multiple pieces of equipment at the same time. The wheel pit is partially cut into the bedrock where there was a natural fault leaving a step for the water to run off, and partially built up using stone blocks to increase the height at which the water flows onto the wheel.

The waterwheel is classed as a “High Breast-shot” waterwheel, meaning that the water flows onto it quite high up at the back, and it is gravity driven for a third of a turn. The wheel pit is shaped with a curvature that matches that of the wheel. This, along with the shape of the buckets, prevents water from escaping from the buckets before the wheel has turned all the way to the bottom.

The waterwheel was in a poor state before the restoration works began, with the wrought iron buckets very badly corroded, and the sole plates practically non-existent in places. It now has a full new set of 64 corten steel buckets, and new sole plates fitted to the original cast iron rims, spokes and hubs which were cast at a foundry in Carlisle in 1843.

After viewing the water wheel and tail race, enter the mill through the right hand side door into the hurst floor.