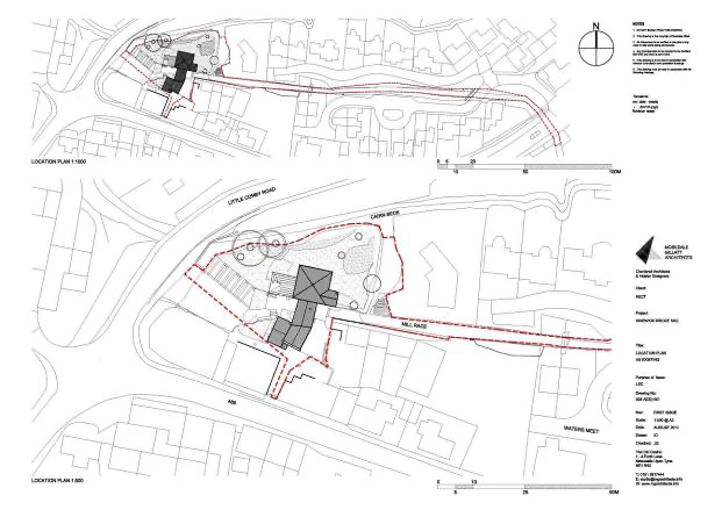 There have been various mill buildings here over the ages, the first one appearing in written records in eleven sixty nine. This, and previous, mills on the site were chosen by topographical considerations such as the presence of a natural stream and associated sandstone outcrop to provide a natural fall for water re-directed from the Cairn Beck.

The mill has been rebuilt, extended and improved numerous times since then, with the last major rebuilds prior to the current one, in eighteen hundred and four and eighteen thirty nine when it was part of the Howard Estate at Corby Castle. These improvements were celebrated by the dated weather vane at the top of the mill.

The current powerful all iron water wheel is dated eighteen forty five, suggesting an upgrade of the mill machinery at that time, perhaps to accommodate more ancillary machinery. Earlier timber shafting and gears would have been replaced in iron to cope with the power of the new wheel. A new complex of farm buildings associated with the miller’s farming operations were built during the period eighteen forty three and eighteen sixty one, around a yard to the south east of the mill. The mill was in continuous use up to nineteen eighty nine when it closed.

In two thousand and fifteen, the mill was purchased by Cultura Trust and subsequently restored between two thousand and seventeen and two thousand and nineteen, with grants from a range of sources including the Heritage Lottery Fund, Historic England, The Architectural Heritage Fund,  the RDEP Leader Fund, Cumbria County Council, Cumbria Waste Management Environment Trust, Arts Council England, and other private trusts and foundations.

The Mill is now run as a Community Benefit Society, milling flour and producing baked goods.

The Mill Tour begins at the front of the Mill near the water wheel and standing on the platform of the tail race.