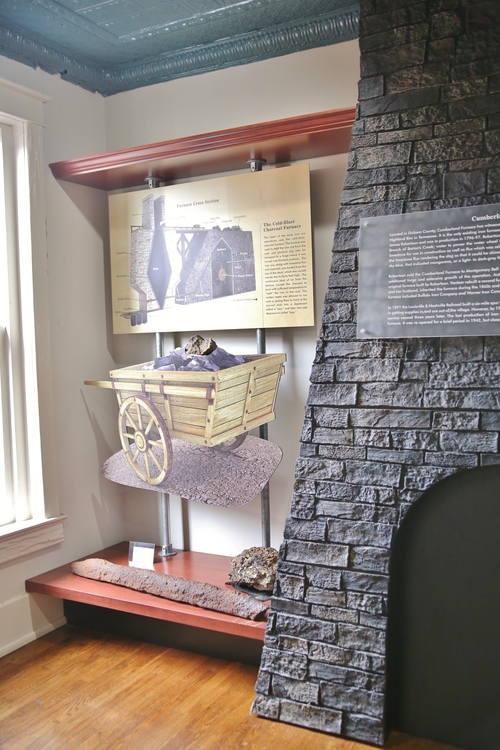 The history of Dickson County is summarized on the storyboards in these two rooms.

There are six incorporated communities in Dickson; the three southernmost-Dickson, White Bluff, and Burns-all date from the period of the railroad's expansion.

The earliest settlers in the county were drawn by the heavy concentration of iron ore in the area, and the more northern communities grew up around the iron industry, which is celebrated in the adjoining room.

The large portrait in the Iron Industry area is of Montgomery Bell, the iron-master most associated with the area. A painting of the Narrows of the Harpeth by Tennessee artist Michael Sloan is on display in the same room.

The Narrows of the Harpeth, located in Dickson County until Cheatham County was formed in 1856, features a tunnel drilled by Bell's slaves through a narrow limestone bluff on the Harpeth River. The level of the river is higher on one side than the other, so the water flowing through the tunnel creates a small waterfall, used by Bell to power machinery.On the wall by the exit is a map showing the locations of all the furnaces and forges in or near Dickson County.