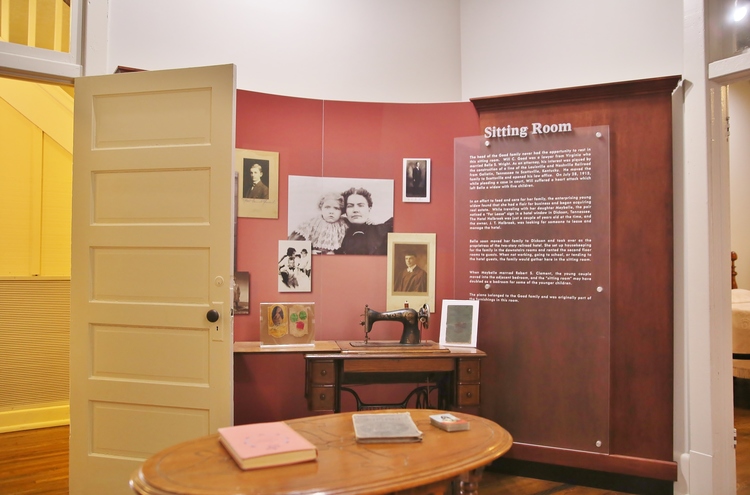 The hotel manager and his or her family lived in this three room suite. The Sitting Room is furnished as it would have been in the 1920s.

The manager at that time was a widow from Kentucky named Belle Goad; her husband- an attorney-had suffered a fatal heart attack while arguing a case and left her with five children to support.

Information about the family is included on the story boards to the left as you enter the room. The photographs are of Robert and Maybelle (Goad) Clement; two younger views of Mr. Robert; photos of Agnes (Shipp) Weems Clement (who was the first woman to serve as a county school superintendent in Tennessee) with her older daughter; and one of her with Robert and his younger sister. There are also two photos of Mr. Will Goad. In the next room there is one of Mrs. Goad.

The period radio is a working model. The piano, the bed, cradle, and chest in the bedroom belonged to the Goad-Clement family.

Robert and Maybelle Clement were living in the bedroom that adjoins the sitting room when their first son Frank Goad Clement was born on June 2, 1920. Frank went on to become the longest-serving governor in Tennessee's modern history.