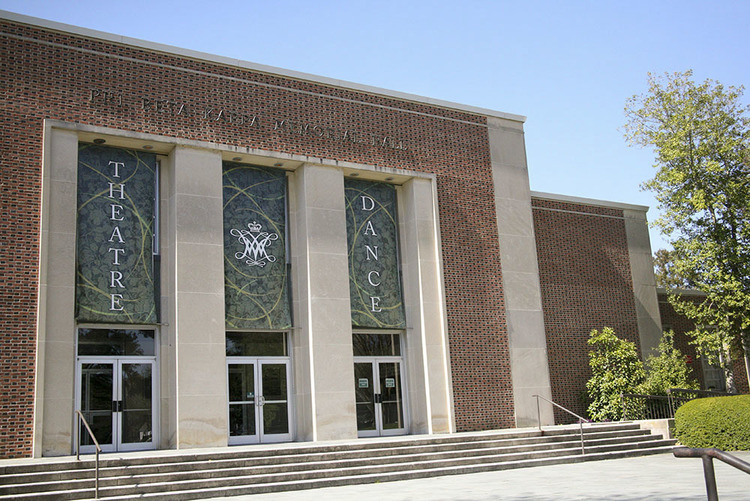 Established 1957. Phi Beta Kappa Memorial Hall was formerly the back half of Andrews Hall and home to the Department of Theatre, Speech, and Dance. Beginning in June 2018, Phi Beta Kappa, affectionately called PBK, is underway with major renovations in conjunction with the university’s new Arts Quarter on campus. While undergoing renovations, the Theater, Speech, and Dance Department performances will be held in Kimball Theater located in Merchant’s Square in Colonial Williamsburg. Formerly, PBK hosted the Virginia Shakespeare Festival every summer and the Theatre Department puts on two-stage productions each semester. During their winter break, students come back early to direct, produce, and perform a musical through the Sinfonicron Light Opera Company. Award-winning actress Glenn Close ’74 performed in PBK during her time at William & Mary. Speakers and performers will often take the stage at PBK; recent noteworthy performers include comedian Bo Burnham, actress Laverne Cox, CNN host Anderson Cooper, and former FBI Director James Comey ’82. You do not have to be a department major or minor to participate in any of the productions put on in PBK or to be involved in any performing arts at William & Mary.

PBK Hall is named in honor of Phi Beta Kappa, the first Greek organization established on a college campus and now the most prestigious university-level academic honor society. PBK was originally founded at William & Mary in 1776.