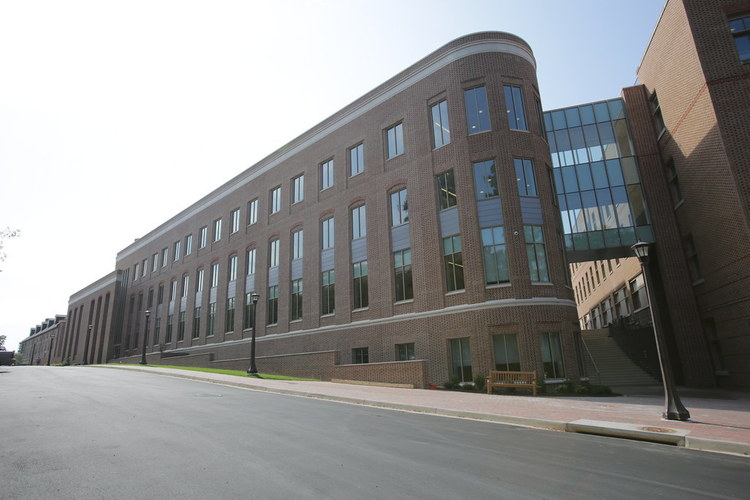 As you cross the street, the academic building on your right is one of three Integrated Science Centers (ISC I, II, III), which house the Departments of Biology, Chemistry, Neuroscience, and Psychology. This first building was originally named Rogers Hall. It was named after William Barton Rogers; alumnus, former professor at William & Mary, and founder of the Massachusetts Institute of Technology in Cambridge, Massachusetts. ISC I, II, and III are all connected as part of a three-building project designed to bring W&M’s science facilities into the 21st century. Our students and faculty have always participated in cutting-edge research, and now the facilities match the level and quality of scholarship going on inside of them. ISC III opened in Fall 2016.

To exit, continue walking and turn left at the end of the hallway. On the wall to your right, there is a display case of research published by W&M undergraduate and graduate students. Continue walking and turn right, and you will find lounge area with an exit on your left. Exit the building through these doors, turn right and proceed along the brick path towards the sundial.

The area on your left is Barksdale Field, named after Martha Barksdale (class of 1922, M.A. 1929), President of the first Women’s Student Council. William & Mary was the first institution of higher education in Virginia to become co-educational, first admitting women in 1918. Though initially intended for women’s sports practices only, Barksdale Field is now used for men’s, women’s and co-ed club and intramural sports.

Continue on the brick pathway along the Integrated Science Centers and straight ahead.

The Sundial is a circular area with benches, and serves as the center of academic New Campus. The walk toward the sundial will take you past another field located on your left. This open space will be the future site of ISC IV which will house the Mathematics, Computer Science, and Kinesiology Departments as well as the Information Technology Center.