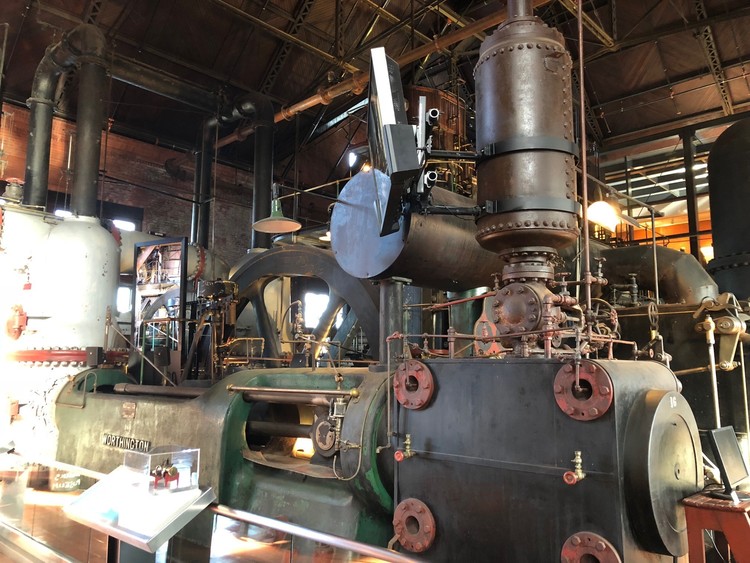 From 1898, when the Allis engine was completed, until the early 20th century, the station operated smoothly. However, over time, the Leavitt engine was becoming less reliable. To keep up with the demand, the machine was being run faster than intended, and as a result, it was constantly down for maintenance. Before long, it was deemed that the engine was more trouble than it was worth to keep it running. Knowing the significance of the Leavitt’s novel engineering, and not wanting to spend the money to dismantle it, it was shut down and left in place. To take its place, work began on installing the Worthington-Snow Pumping Engine. Completed in 1921, this dual-expansion horizontal pumping steam engine appeared similar in size to the station’s original Holly-Gaskills, but had almost double their output, at 15 million gallons per day. This small and efficient engine would prove much easier to maintain. The Allis and the Worthington engines worked together until the 1970s supplying the city of Boston with water.

However, around 1974, things changed yet again. By that time, the city was able to fully access the Quabbin Reservoir as its new source of water. Though the reservoir was completed in 1936, it took decades to establish all of the distribution pipes, as the Quabbin is located over 60 miles west of Boston, out past Worcester. Unfortunately, to create this massive reservoir with a capacity of 412 billion gallons, four towns were taken by eminent domain. One reason this location was so desirable was that it was situated over 500 feet above sea level, which meant that whether you lived at sea level, or in one of those topographically high areas, the Quabbin was at a high enough elevation that nearly everyone could get their water using simple gravity. The Quabbin reservoir is still the primary supply reservoir for the Massachusetts Water Resources Authority today, which serves 51 different communities throughout Massachusetts. Of course, we do still have pumping stations today: these are needed to get the water up to the ideal pressure and up to any particularly tall buildings. But these tend to be small, electrically powered, centrifugal pumps rather than the giant steam powered piston-driven engines we see here. Without significant need for these engines, the Chestnut Hill High Service Pumping station ceased operations around 1974.

Though the story of our pumping engines has come to an end, there is another aspect of our site that is significant. For the last stop on the tour, head back behind the Allis engines on the right side to the exhibit case by the rear windows.