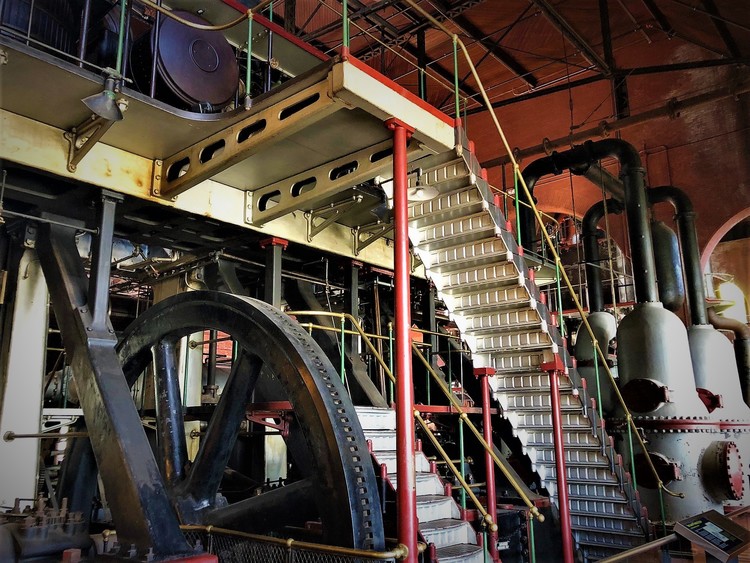 If you look to your left, you can see a black and white photograph of one of the two original Holly-Gaskill engines that worked to provide water to the city. These machines were straight-forward in how they operated: to start coal was burned to create a fire that would heat water in a large tank called a boiler. As the water was converted to steam, it would travel through pipes on the ceiling, enter the engine and push a piston rod horizontally. This was connected to a pump that would ultimately create enough pressure to move the water up to a reservoir about 140 feet higher than where we stand now, at the top of Fisher Hill. From there, it could flow down to everyone who needed it.

Each Holly-Gaskill could pump about 8 million gallons per day, which may seem like a lot at first, but when you take into the account that the average American, then and now, uses between 60 and 100 gallons of water per day, suddenly, it doesn’t seem like quite so much anymore.

As the city limits expanded and more people moved into the area, it soon became clear a larger machine would be needed to move the necessary quantities of water out more quickly. But again, at this time, most machines pumped either horizontally or vertically, and our building was built with those small, standard machines in mind. So when they tried to fit in a larger engine that pumped horizontally, it didn’t fit. And when they tried to fit in a larger engine that pumped vertically, it also didn’t fit. The next thought was to try digging down deeper into the basement, but they couldn’t risk having the two furiously pumping Holly-Gaskill engines falling into the hole. Then it was, well maybe we can raise the roof, but that seemed a bit too expensive, especially since the station was almost brand new. Luckily, they were able to secure the services of local engineer Erasmus Leavitt, who had become internationally famous for his ability to customize steam engines for nearly any purpose. By using a Rocker arm, Leavitt was able to convert vertical motion into diagonal motion. The pumps could then be set only slightly lower than the engines at a diagonal and everything could fit inside the existing building. It’s unique design and the fact that it is the only remaining example of Leavitt’s work, ultimately led to its being designated a National Historic Mechanical Engineering Landmark.

Completed in 1895, the novel Leavitt engine could pump out 20 million gallons of water per day. Unfortunately, despite its being a great addition, the population of the city was still growing – in fact, it was nearly doubling every 20 years. And so, by the time it was finished, it was already clear that an additional machine would be needed.

Turn right and head straight under the archway. Your next stop will be in the 1898 addition to the original building, next to the Allis Engine.