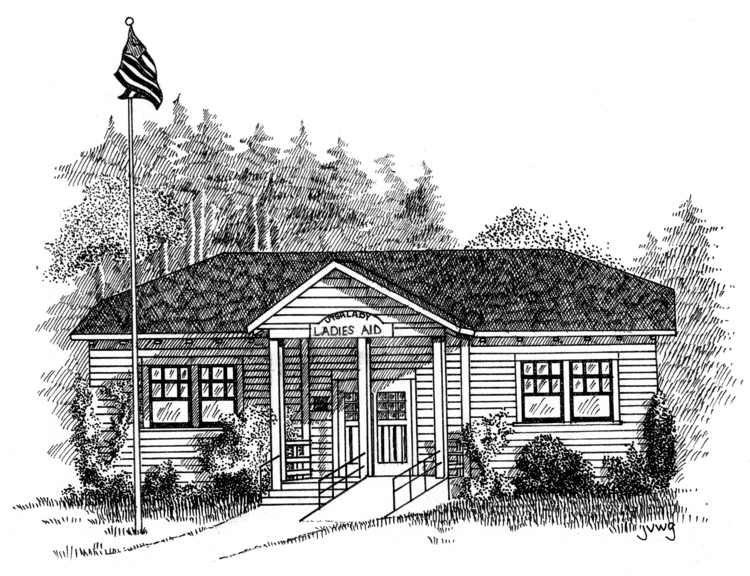 Uts-a-laddy Ladies Aid was founded in 1908.  It is the second oldest organization in Island County.  It began with a small group of hard-working Scandinavian women of Uts-a-laddy.  The first meeting was held at the home of H.P. Olsen. The founding members were Mrs. William Lund, Mrs. Lena Lyngstad, "Grandma Rolfson", Mrs. Sam Mathison, Mrs. E Rindahl, Mrs. Theo Rolfson and Mrs. Constance Olsen.  This group of Christian women was concerned about the lack of religious education for young people and wanted to give support for their one room school.  Their goal was simple; they wanted to improve the quality of life of their children and the families of their community.

The ladies met once a month in members' homes, except during harvest time and other seasonal home duties.  At times, a pastor from Stanwood would come by horse and buggy to meet and lead services for the group.  By 1914, the membership had increased to 14, and the ladies began talking about having their own building to hold meetings, Sunday School and community events.  To raise funds, they held lutefisk dinners, auctions, ice cream socials and quilt raffles.

The location of the building is close to an area that was once a village of the Kikiallus Indian Tribe.

The building has been used for many community activities.  During the war years of the 1940s, it was equipped as a first aid station.  It was also used by the ladies to sew many articles of clothing and bandages for the Red Cross.  The building has been used for various community events such as social, civic, school, government, weddings, funerals, youth clubs, church and Sunday School.

The Ladies Aid organization is a symbol of our community spirit and unity for those living on Camano Island.

The motto of the organization is: Preserving the Past for the future.

In 1998, the building was listed on the Washington Heritage and National Register of Historic Places.  Most recently the Uts-a-laddy Ladies Aid was presented with an Historical Preservation Stewardship Award from the Washington State Department of Archaeology, recognizing work that has been done to maintain and preserve our historical building and the history of our community.