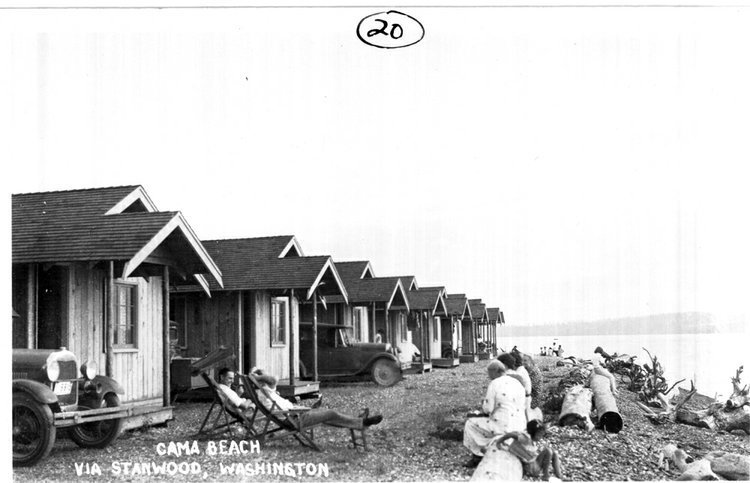 Cama Beach Historical State Park sits within the traditional territory of multiple Coast Salish Native American tribes, whose people have fished and harvested shellfish in the area for more than 10,000 years.  The Treaty of Point Elliott in 1855 and subsequent privatization of the land, logging operations and tourism restricted the Native peoples' access to the shoreline.

The first Euro-Americans to explore the area were members of British explorer Captain George Vancouver's 1792 expedition.  Vancouver's ships, the HMS Discovery and the HMS Chatham, approached Camano Island from the south and turned back after reaching the southern end of the island.  Crewmembers Peter Puget and Joseph Whidbey, Vancouver's lieutenant, led a smaller group that explored Saratoga Passage, passing the present-day park site.

Euro-American settlement of Camano Island began in the 1850s.  Logging came to the island as early as 1858, but it took off in the 1890s.  Records document 18 separate logging operations on Camano between 1895 and 1920.  The deforestation gave way to agriculture and grazing, but in 1910, after an auto bridge was built between Stanwood and Camano Island, tourism became a viable industry for the island.

Car ownership changed the way Americans traveled.  The phenomenon offered economic opportunities for entrepreneurs who opened "auto parks" and camps.  The Great Depression leveled the tourism playing field, and auto park vacations increased among all classes of people during the 1930s.

Cama Beach Resort opened as an auto camp in 1934; it was operated by one family for 55 years -- the Stradleys, their daughter Muriel and her husband Lee Risk.  Families returned year after year to vacation, where activities included fishing, boating, swimming, tennis, group campfires, singalongs, movies, ping-pong, dancing and card games.  When prosperity returned to the United States during World War II travel habits changed and American auto parks declined.  Once one of 14 resorts on Camano Island, Cama Beach was the only such destination on the island by 1964.  The resort closed in 1989.

The daughters of Lee and Muriel Risk sought to preserve the property, and Washington State Parks began acquiring the site through purchase and donation in 1994.  The Risk sisters were part of the master planning process and, at their behest Washington State Parks has continued the tradition of Cama Beach as a place of rest and renewal.  In 1999, the park was listed on the National Register of Historic Places.