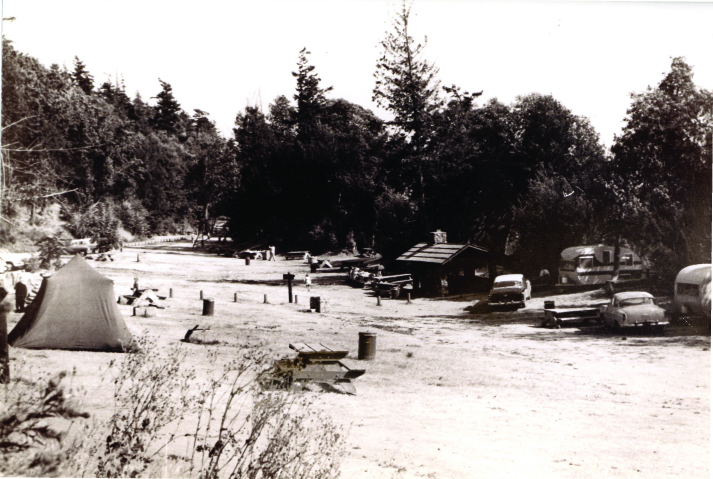 On Camano Island in 1949, the "entire shoreline was owned by individuals, resorts, or real estate or lumber companies, except ninety feet in three different points owned by the County, these not generally known.  The general public had no access to the beach" -- yet they lived on an island!

The South Camano Grange petitioned the Washington State Parks Commission and the State set aside 92 acres of school land at Point Lowell for a park.  The Parks Commission agreed to contribute $5,000 toward the purchase of the park if the community would demonstrate its commitment by providing volunteers to help construct the park.  The South Camano Grange agreed to follow through and organize the project. Mayors of nearby Stanwood and East Stanwood cooperated by proclaiming a State Park Day and merchants promised to close for a day and bring their employees to work on the project.

Three bulldozers, nine farm tractors with equipment, 34 pickups and trucks, one large trailer truck, three wreckers, and a team of horses worked all day.  The women served their traditional clam chowder, coffee, sandwiches, cookies, pop, and ice cream for the volunteers.  A doctor and nurse, with emergency supplies in a hospital tent, were on duty along with the State Fire Warden.

By the day's end, the volunteers had built picnic tables, cleared land and paths, and leveled a road and parking area.  They had provided a place for everyone to get to the beach. All labor -- 3,561 man-hours and 376 machine hours -- and all expenses had been donated.  The estimated value of the work was $6,000. The South Camano Grange won third prize in the national contest.

In 1958, Camano Island State Park expanded with the acquisition of an additional Point Lowell tract.  The State Parks Commission voted to extend the original park around the point to Elger Bay, an additional 3,000 feet of waterfront.  Today (2012) the park covers 134 acres, with 6,700 feet of shoreline, and has 88 campsites and five cabins, among other amenities.