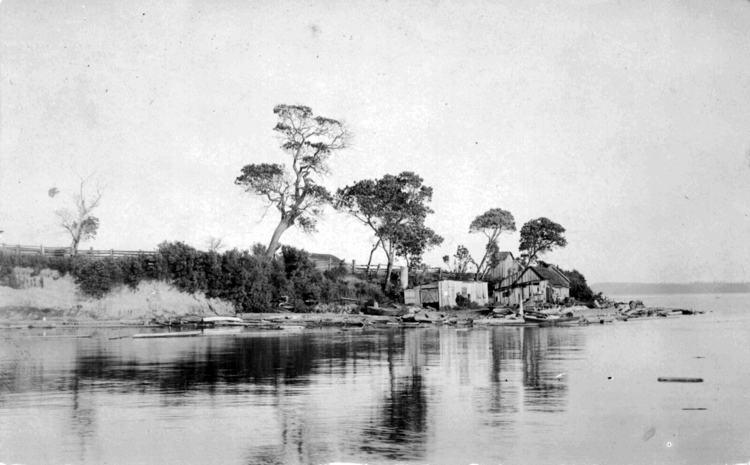 In 1904, Stirling J Barnum arrived on Camano Island from Binghamton, New York. After searching the island by boat, he bought 110 acres and cleared 40 of them for a farm. A second phase of logging had begun after the Ut-sa-laddy Mill closed a decade earlier and the Livingston Bay area was growing.

In their earliest days, according to accounts by his daughters, the Barnum family fished and raised Rock Island Red chickens, sheep, cows, pigs, vegetable gardens and a large orchard. They lived on what they produced and had little association with Stanwood. Potatoes and some oats were their cash crops.   They also grew strawberries that ripened before other farms because of the long afternoon sun. Their only modern convenience was a telephone at the time.

The bridge to the island wasn’t built until 1909 and the road from Stanwood where there was a ferry crossing, only went as far as Terry’s Corner.  Before the bridge, the family made only a few trips a year to Stanwood on a scow or a rowboat. Usually supplies were picked up by the steamer or scow that brought supplies to the mill across the cove before there was a road. They went in on the incoming tide and came back on the outgoing tide. The children rode their pony to Terry’s Corner to pick up mail.

In 1908, Barnum was instrumental in establishing the Central School for his children and others in the vicinity so they would not have to travel all the way to Ut-sa-laddy or Camano City.  Classes were first held in the Evans home, neighbors of the Barnums.  A school building was originally constructed at the corner of Russell Road and Barnum Point road and eventually moved to property just north to the current location of the Island County Sheriff department.

Mr. Barnum served one term as County Commissioner from 1914 to 1915 to promote road building on the island and by the 1920s the Island was welcoming auto traffic through Stanwood. A few family members stayed on or used it as a summer place.  The most recent memory of popular access was the construction of Barnum Point Inn, a new bed and breakfast built in 1992 or 1993 by Carolin Barnum DiLorenzo.  She operated it for about 25 years.

The property remained in the family’s hands until the 2010s when family members could no longer support the property.  In about 2013 they began negotiating with community groups interested in preserving this spectacular and undeveloped geographic feature that could have been sold for residential development. Purchases of different sections were made over a period of years and final purchase was made and the park became complete with a new parking lot in 2019. To start off the successful fundraising campaign, more than 600 private donors responded with proactive support from Whidbey Camano Land Trust, Friends of Camano Island Parks, and many other volunteers.