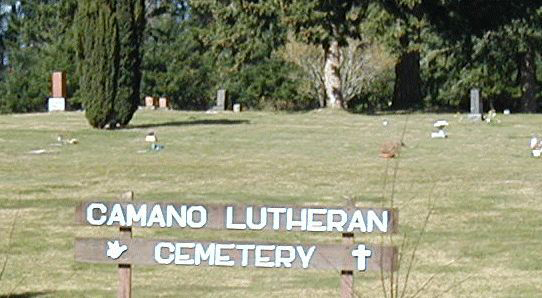 The historical and cultural significance of Camano Lutheran Cemetery is tightly tied to the establishment and evolution of Camano Lutheran Church.  The earliest record of the church services occurred in 1876 with the formalizing of a congregation in 1890.   At that time and up until 1920, logging thrived on Camano Island, with 10 to 20 active camps competing for the rising demand of timber.  Many Scandinavian immigrants sought employment, opportunity and ultimately a home.  Life was modest and remote with rough logging roads and supplies transported by horse-drawn wagons, scows, steamers, launches and/or cable ferries.  Camano Lutheran Church was formed by these early pioneers to celebrate the rites of marriage, birth, baptism and ultimately death.  Lutheran churches had a long tradition of establishing their own cemeteries.

Having a cemetery was also a matter of practicality.  Families often arranged to bury their dead together in a family plot of land which later grew into a true cemetery.  This was the case of Camano Lutheran Cemetery.  Records of burials appear as early as 1909 yet it was in 1919 that the land was purchased, 1922 when the cemetery was officially platted and recorded in Island County.  This cemetery was a reflection of the community it served.  For example, early pioneer Knute Frostad (1858-1942) with wife Bergitta (1856-1942) immigrated from Norway to Ut-sa-laddy  to obtained employment at the sawmill.  He then purchased 41 acres near Livingston Bay to operate a successful dairy farm.  He was elected to the State Legislature, and served as Board Commissioner for Island County.  Similarly, Margaret Kincaid (1875-1960) and her husband Robert (1867-1957) were known to welcome all, especially Native Americans, as evidence by her smiling picture with Mrs. Jake (Ki-ki-al-lus) and Mrs. Kate Jake O'Brien.  Almost every Camano Island pioneer family (Einarsen, Mellums, Barnums, Konnerup, Eide, Olson, Leque, Davis, Hall, Magelsson) is similarly represented at Camano Lutheran Cemetery.

Today, the heritage of Camano Lutheran Cemetery is celebrated during Memorial Day honoring over 200 military veterans (WWI, WWII, Korean, Vietnam, Afghanistan, Iraq).  Camano Cemetery will join the Camano Island Historic Sites Audio Tour in 2020 which will be a virtual event.  This event provides an opportunity for cemetery board members to disseminate cultural and historic information about the significance of Camano Lutheran Cemetery on a regular basis to the public at large.