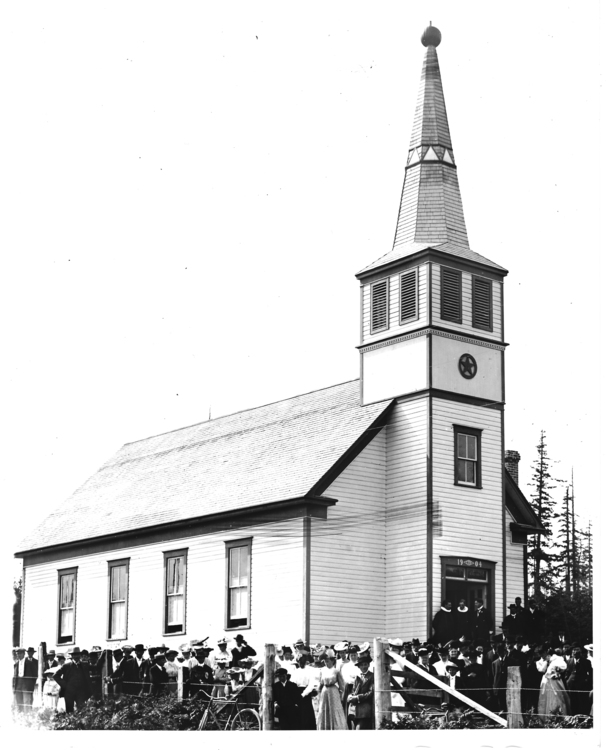 On a gently sloping hillside above Livingston Bay stands the 1904 wooden church once known as the Scandinavian Evangelical Lutheran Church.

The Camano Lutheran Church was established in 1890 in Ut-sa-laddy.  The congregation was organized December 17, 1890, by Rev. Christian Joergensen of Stanwood.  When the sawmill at Ut-sa-laddy closed, the decision was made to move and build near Livingston Bay, hence the incorporated name of the Evangelical Lutheran Congregation of Livingston Bay.

In 1895, the congregation held services in the Livingston Bay School which was located across the road.  That school was bought and moved on site and now is the Pioneer Hall. Construction of this church building began in 1904 and was dedicated July 9, 1906.  There is a small plaque near the front door of the old church (east entrance) noting that it is on the State Register of Historic Places.

Of particular note are the original altar and pulpit built by JP Larsen and KP Frostad.  Eleven different kinds of wood were used.  These pieces of wood were gifts to Mr. Larsen from the different Captains of the sailing ships that once docked at Ut-sa-laddy.

The congregation was served out of Stanwood until 1953 when Ralph Moe was called to be the first resident pastor.  In 1965, an educational building and church narthex were built and dedicated.  In 1979 and 1980, on the 90th anniversary of the congregation, a Multi-Purpose building was built.

Camano Lutheran Church continues to be a vital community of faith in the Camano Island and Stanwood area.  Each Sunday, morning worship is still held in the Historical Sanctuary.