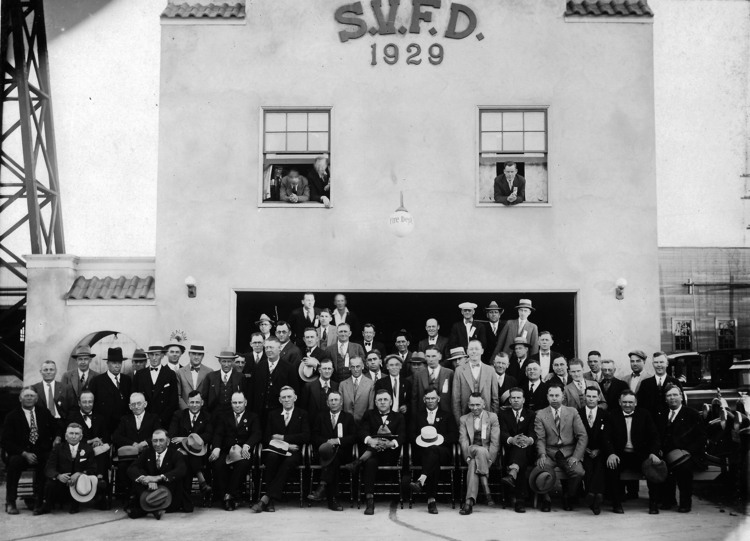 In 1929, at the beginning of the Great Depression and after the town had suffered many serious house fires, the city fathers of Stanwood were struggling to raise $2500 for a larger new fire station.  They wanted to build a “building suitable for the demands of the fire department and a credit to the town.”  They decided that it would be constructed of concrete on the lower section with an upper story of wood walls and stucco.  The building would be 60 feet long and 22 feet wide with sleeping quarters for two men, a large meeting or banquet room and kitchen facilities.  The lower floor would house the trucks and pumping equipment.  They were careful that “all possible means of raising money will be used to pay for the building so as to make it as little a burden on the city as possible.”

The businessmen of the town were urged to volunteer to help carpenters Peter Bransmo and Ole Vatne build the building and many did.  They also held numerous fund-raising benefit shows including a fireman’s ball in the I.O.O.F. Public Hall.  In October of 1929, they held a banquet to officially accept their new building that had an 18 foot “slick brass sliding pole” that was customary in fire stations of the day.  In the article on the banquet they were equally proud of their handmade portable pump truck that took 500 hours to construct.

In 1954 when the Twin City Foods Company wanted to expand, the unusual Spanish Revival or Mission style building was moved from Saratoga Street to its present location at the corner of Oliver (270th Street) and Irvine (102nd Drive).  They raised the building two feet from its original proportions.