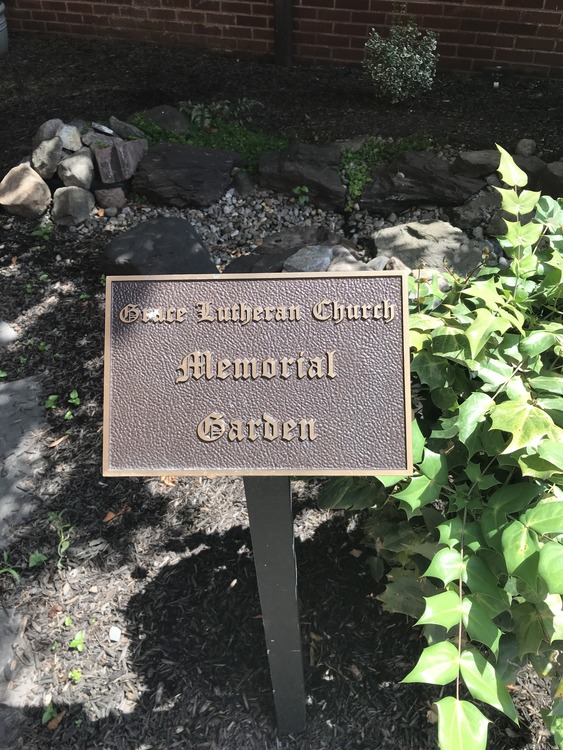 Pastor Steve Verkauw and his congregation welcome you to our church home. A large underground rock basin collects rainwater from the church roof, new addition, and parking lot, including a native plant garden. The captured rainwater recharges the aquifer instead of filling up street drains.

When Grace Lutheran was undergoing a large renovation project we wanted to capitalize on the fact that we would have a large portion of our parking lot torn up. We asked, "How could we make the most of this to manage stormwater pollution?" Ultimately our engineer and the City of Lancaster settled on a plan that would direct the runoff from half the church roof, the entire roof of the new addition, and part of the parking lot into a large underground basin. The rock basin - aptly named because of the large boulders through which surface runoff can enter -- collects stormwater from four large downspouts, directing thousands of gallons of stormwater away from the street’s drains during a typical rainstorm. The underground basins won’t require maintenance -- at least not for the first 20 years or so -- and it removes a significant amount of stormwater from the city’s drainage system. Instead of directing this polluted runoff into the city utility, it will be directed back down into the aquifer, but will be filtered naturally by the Earth as it percolates through the rock basin and sand-soil layers before it recharges the aquifer.

In addition to this, the church’s parsonage has had two 50-gallon rain barrels for several years already. These harvest rain water from the parsonage roof for watering plants or simply just putting it back into the ground instead of down the drain.

The project cost $30,000 and was paid for by donations from congregants through a capital campaign. This was a tremendous commitment from the church members, including a major gift of $10,000 from Marianne and Joe Nolt.

When asked about what was learned by doing this project, Pastor Steve said that it really surprised him how difficult it was to convey to the engineers that, yes, we were willing to pay more money in order to do the right thing for the ecosystem. If you embark on this road, the lesson learned is to make sure your engineers know you are trying to reduce pollution and that you understand that this might cost more. Contractors and engineers are trained to advise you otherwise. We all have a lot of work to do to shift the thinking in the world.

As you tour our property we offer this reflection: “You shall be called the healer of the breach, the restorer of the streets to live in.” Isaiah 58 verse 12b

Next
Faith in Action: Creation Care for Clean Water
HOME