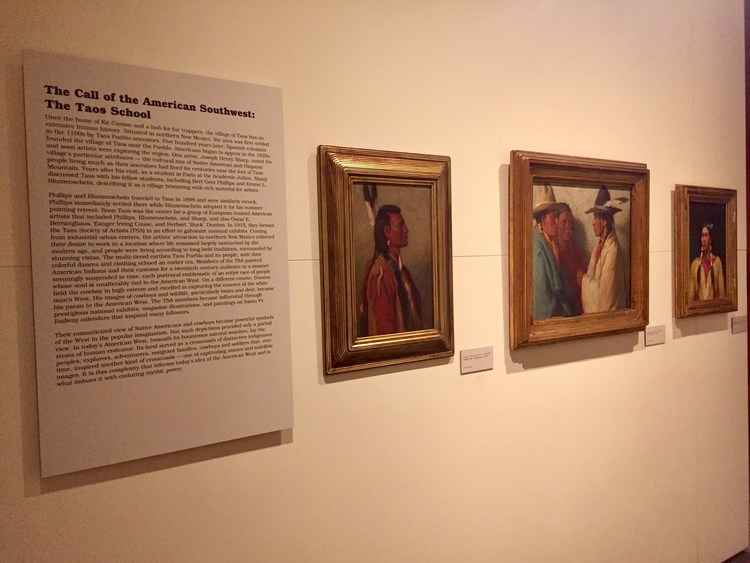 The Call of the Southwest: The Taos School

Once the home of Kit Carson and a hub for fur trappers, the village of Taos has an extensive human history. Situated in northern New Mexico, the area was first settled in the 1100s by Taos Pueblo ancestors. Five hundred years later, Spanish colonists founded the village of Taos, near the Pueblo. Americans began to appear in the 1820s, and soon artists were exploring the region. One artist, Joseph Henry Sharp, noted the village's particular attributes—the cultural mix of Native American and Hispanic people living much as their ancestors had lived for centuries near the foot of Taos Mountain. Years after his visit, as a student in Paris at the Académie Julian, Sharp discussed Taos with his fellow students, including Bert Geer Phillips and Ernest Blumenschein, describing it as a village brimming with rich material for artists.

Phillips and Blumenschein traveled to Taos in 1898, and were similarly struck. Phillips immediately settled there while Blumenschein adopted it for his summer painting retreat. Soon Taos was the center for a group of European-trained American artists that included Phillips, Blumenschein, and Sharp, and also Oscar Berninghaus, Eanger Irving Couse, and Herbert "Buck" Dunton. In 1915, they formed the Taos Society of Artists (TSA) in an effort to galvanize national exhibits. Coming from industrial urban centers, the artists' attraction to northern New Mexico reflected their desire to work in a location where life remained largely untouched by the modern age, and people were living according to long-held traditions, surrounded by stunning vistas. The multi-tiered earthen Taos Pueblo and its people, with their colorful dances, and traditional clothing, echoed an earlier era. Members of the TSA painted Indians and their customs for a twentieth-century audience in a manner seemingly suspended in time, each portrayal emblematic of an entire race of people whose soul is unalterably tied to the West. On a different course, Dunton held the cowboy in high esteem and excelled in capturing the essence of the white man's West. His images of cowboys and wildlife, particularly bears and deer, became his paean to the West. The TSA members became influential through prestigious national exhibits, magazine illustrations, and paintings on Santa Fe Railway calendars that inspired many followers.

Their romanticized view of Native Americans and cowboys became powerful symbols of the West in the popular imagination. But such depictions provided only a partial view. In today's American West, beneath its bounteous natural wonders, lay the strata of human endeavor. Its land served as a crossroads of distinctive indigenous peoples, explorers, adventurers, emigrant families, cowboys and soldiers that, over time, inspired another kind of crossroads—one of captivating stories and indelible images. It is this complexity that informs today's idea of the American West and is what imbues it with enduring mythic power.