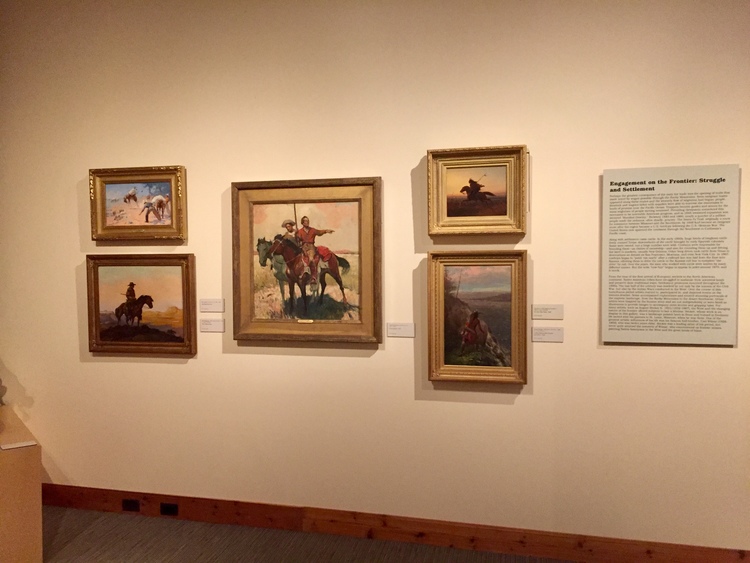 Engagement on the Frontier: Struggle and Settlement

Perhaps the greatest consequence of the early fur trade was the opening of trails that made travel by wagon possible through the Rocky Mountains. Soon emigrant trains appeared along these routes and the westerly flow of migration had begun: people, livestock and wagons laden with supplies were able to traverse the mountains to lands of promise near the Pacific Ocean. Trappers became guides and scouts for the mass migration of people moving westward. Prevailing viewpoints considered this movement to be inevitable American progress, and in 1845 westward expansion was declared “Manifest Destiny.” Between 1840 and 1860, nearly a quarter of a million people made the arduous, often deadly journey. The Santa Fe Trail, originally a route for commerce between Missouri and the Southwest, by 1848 had become an emigrant route after the region became a United States territory following the United States and Mexican War. The United States now spanned the continent through the Southwest to California's Pacific coast.

Along with settlement came cattle. In the early 1800s, huge herds of longhorn cattle freely roamed Texas, descendants of the cattle brought by early Spanish colonists. Some were owned, but a large number were wild. Cowboys were responsible for branding them—as claims of ownership—and also for rounding them up and driving the herd to markets, usually New Orleans. Other long drives took cattle from Texas to destinations as distant as San Francisco and Montana, and even New York City. In 1867, cowboys began to "point 'em north" after a railroad line was laid from the East into Kansas, allowing them to drive the cattle to the Kansas rail line to complete "the drive" by rail. Over the years, the men who worked with cattle were known by many different names. But the term “cow-boy” began to appear in print around 1870, and it stuck.

From the time of the first arrival of European settlers to the North American continent, Native American tribes have struggled to maintain their ancestral lands and preserve their traditional ways. Settlement pressures mounted throughout the 1800s. The last half of the century was marked not only by the trauma of the Civil War, but also by the Indian Wars conducted in the West. Over the course of this tumultuous period artists reacted to, participated in, and depicted events on the western frontier. Some accompanied explorations and created stunning portrayals of the majestic landscape, from the Rocky Mountains to the desert Southwest. Other artists were inspired by the human story and set out independently or were hired as illustrators to provide images to accompany news stories and gripping tales. For many artists, such as August Becker, the West and the changing nature of the frontier offered subjects to last a lifetime. Becker, whose work is on display in this gallery, was a landscape painter born in Bonn and trained in Germany. He moved with his parents to Saint Louis, Missouri, when he was three. One of the greatest artistic influences of his life was his famous half-brother, Carl Wimar, who was twelve years older. Becker was a leading artist of his period, but never quite attained the notoriety of Wimar, who concentrated on frontier scenes, painting Native Americans in the West, and the great herds of bison.