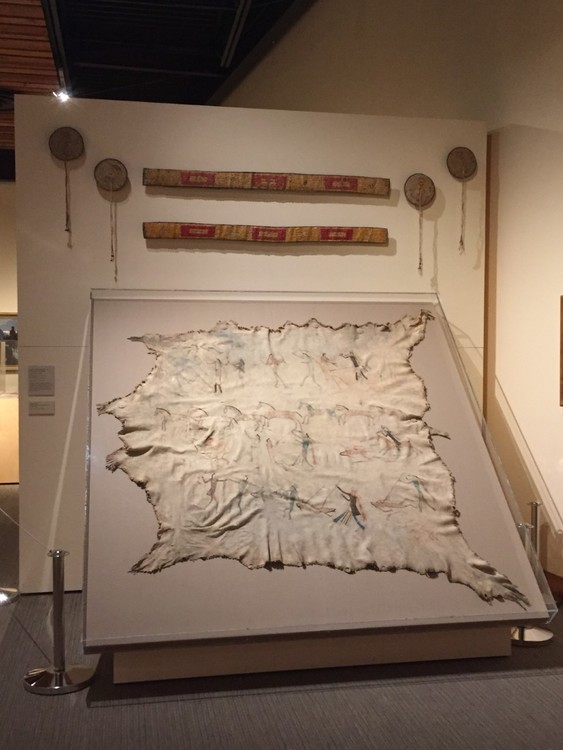 People of the Land: Native American Life and the Bison

Depictions of Native American life in the 19th and early 20th centuries reflect the artists’ views of the people and the cultural changes that occurred during that time, primarily as a result of American settlement, and expansion throughout the West. Each artist who painted the subject provides us with the opportunity to see glimpses of the Native cultures as they appeared from the early 1800s onward through the historical transitions and shifts of perspective and aesthetic style.

In the early 19th century, Native Americans were widely idealized as the embodiment of the Romantic vision, living as one with nature. Artist George Catlin was not alone in his opinion when he compared Native Americans to the fine models portrayed by ancient Greek sculptors with “inimitable grace and beauty.” As the territories west of the Mississippi River progressively opened, the early artists were the first to document the various Plains and western tribes. Some were attentive to ethnographic detail, while others expressed the Romantic view, placing the Native Americans of the West as Nature’s Man, the human exemplar of the pristine wilderness.

Bison were extremely important to Native Americans, and served a larger purpose than just meat for sustenance; bison supplied virtually everything a Native person needed to survive – from utensils such as spoons to housing. Bison have long been considered sacred because of the animal’s importance to their livelihood, and in tribute to its great strength and stamina. An impressive animal on the open plains, a mature bull stood about six feet tall at its humped shoulders and could weigh up to 2,000 pounds. Every part of the bison that was not used for food had another purpose. The animal’s hide, horns, skull, hair, ribs, and tail were all used to make items such as tipis and furnishings; ceremonial objects; riding and transportation gear; tools and utensils; weapons and recreational equipment; clothing that included caps, moccasins, leggings, mittens, shirts, coats, capes, dresses, belts, underclothes, breechcloths, headdress ornaments, and robes.

The object seen here on display is a Painted and Incised Buffalo Robe, dated to circa 1830.

It is Attributed to the Lakota, or Teton Sioux.

And is made of Buffalo hide, and mineral pigments.

For the Native Americans of the North American Plains, decorated buffalo robes were both practical and ceremonial garments. Hides were tanned to remain supple and ornamented with rich designs, which might be geometric or pictographic. The latter, more representational designs often depicted personal records of deeds of heroism; calendars that count winters; tribal rosters; portrayals of visions; important ceremonials; and they were usually painted and worn by men. The more abstract, geometric designs were primarily painted by women, and can often be linked to a specific tribe based on certain identifying elements in the pictorial language.

This buffalo robe is a superb example dating from the 1830s, and features a polychorome (painted) geometric pattern characteristic of the Lakota or Teton Sioux tribe. The Lakota, encountered by the Lewis and Clark Expedition in 1804, were a warlike, nomadic tribe, occupying lands in what is now North and South Dakota.

The design on this robe is an early example of a “box and border” composition, believed to represent the organs, and internal structure of the animal, outlined in a stylized fashion. While examples of the box and border design can be found among other tribes of the Northern and Central Plains, it was favored by the Lakota and usually distinguished by two distinct features: 1) A continuous border on three or four sides, sometimes extending into the head; and 2) A horizonatally-oriented and elongated rectagular field that was located above the center.

The striking design has been incised, an uncommon and painstaking process, in which tiny cuts in the buffalo hide were incorporated into the painted pattern. The robe is completely intact, which is rare, as many other robes were later cut down in size, and used as blankets or padding in sleighs. The natural colors remain remarkably fresh and the overall condition is excellent.