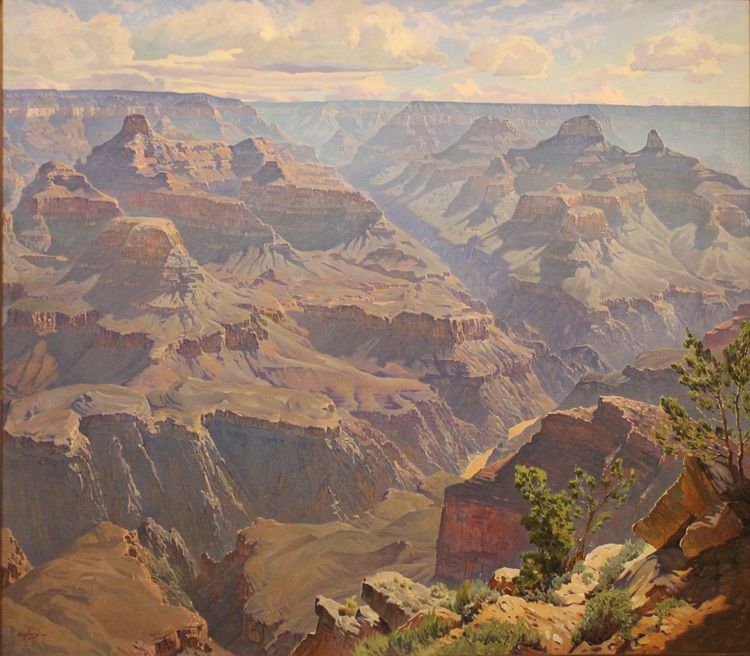 The geologist, United States soldier and explorer of the American West, Major John Wesley Powell (1834-1902), called areas of Arizona, New Mexico, Colorado and Utah “The Great Unknown.” In 1869, he first led an expedition into this unmapped 130,000 square mile region. Powell, much like the artists Carl Oscar Borg and Gerard Curtis Delano, experienced a land of high desert-like plateaus, streams and rivers, awe-inspiring canyons and fantastic rock formations. In this exhibition you can roam the remote rocky Colorado Plateau and experience the canyons carved by eons of wind and water through Edgar Alwin Payne’s Navajo Stronghold, and view The Grand Canyon through the eyes of artist Gunnar Widforss. In 1932, Emil Bisttram, who was born in Romania, found inspiration in the geological formation known as Camelback, a mountain located just northwest of Scottsdale’s Museum of the West. Noting Arizona’s monsoon weather, he painted the dramatic Storm Over Camelback.

Gil Waldman said, “Western art isn’t just about cowboys and Indians, although that certainly is one aspect. It unquestionably can be as important as any other genre of American art, with complex themes and unique perspectives.”