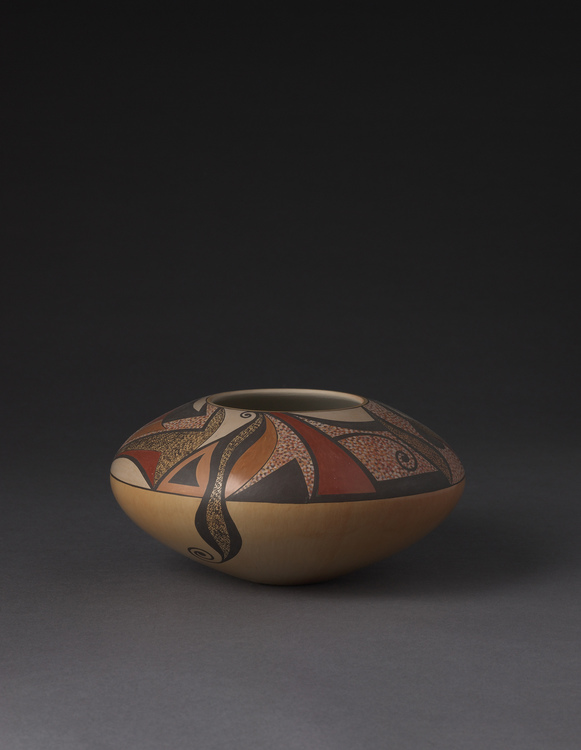 Many contemporary Hopi ceramics are multicolored, often employing unusual colors. Nathan Begaye used green, pink, orange and brown. Les Namingha sometimes likes to paint his pots after firing with a variety of acrylic paints. There seems no doubt that many Hopi potters have widened their palette in the choice of color. This has come about from exposure to canvas painting, the variety of commercial materials available for use in modern ceramics, formal training in Anglo schools of art, and a general liberation from inherited tradition.

In Hopi pottery up until 1900, the colors seen in most of the vessels were black, red, and occasionally white. Black was traditionally derived from boiling plants, particularly Cleome Serrulata, known as Rocky Mountain bee plant or bee weed, to a thick reduced cake. Rocky Mountain bee plant is a colorful, long blooming native annual with large showy flowers in shades of pink and rose pink, and it is invaluable as a nectar source for bees and butterflies. It is traditionally used by Native peoples as a source for dyes, edible leaves and medicinal preparations. When firing in a reducing atmosphere (without oxygen) it leaves a black deposit on the clay. Black can also be made from mineral sources such as manganese or iron compounds, and this is impregnated in the clay. Red colors can result from iron oxide and iron-rich clays when fired in an oxidizing atmosphere.

Pottery is a cultural identifier among the Puebloans. The unique designs characteristic of a tribe or as among the Hopi, even a village, speak to political and social associations and religious affiliations. As late as the turn of the 20th century, Pueblo women marrying into a different ethnic community were expected to cease production of their former pottery and adopt the ceramic traditions of their new home. Not to do so was a cultural affront that invited ridicule and chastisement.