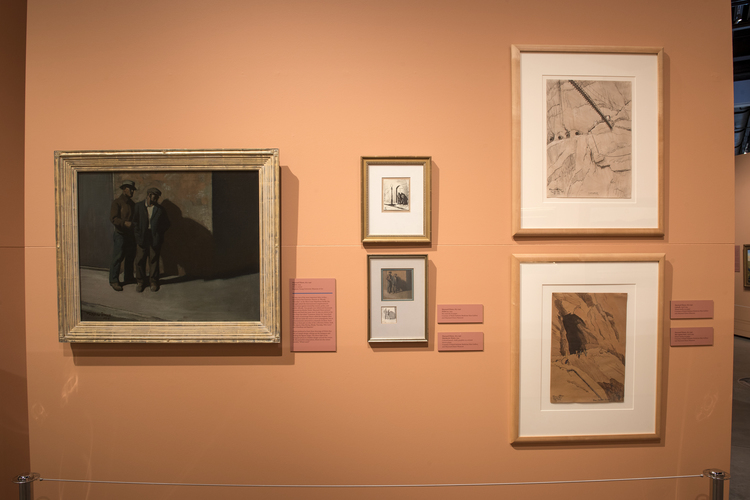 In early 1934, Maynard Dixon received a commission from the Public Works Project of Art (also called PWPA) to document the construction of Boulder Dam (later renamed Hoover Dam). For more than a month, he recorded the daily events of the monolithic dam’s construction. Dixon was allowed by the PWPA to document the dam’s progress as he saw fit; he was significantly affected by the experience, saying, “the rear view of a truck taking tired men home after a day’s work. Seated on the floor of the truck with their legs hanging over the lowered end gate, are four men. The group tells of the whole tale of the muscle weary.”

Dixon sold two watercolors from the Boulder Dam trip at his 1939 studio sale. Their imagery reflects the immensity of the mountain and its resistance to man’s attempt to tame the great Colorado River. Their provocative titles—Catwalk and Men Against Rock—speak volumes about Dixon’s mindset: “Pigmy against everlasting rock.”

In Catwalk, the viewer must search to find the specks of men barely visible inside tunnel openings near a precipitous bridge, juxtaposed against an enormous cliff-side. Men Against Rock, mate to Catwalk, emphasizes Mother Nature’s resistance to men’s shovels and their battle against earth’s rocky crust. Dixon employed somber blues in the men’s clothing, a precursor to the upcoming Forgotten Man series. These Depression pieces, made between 1933 and 1939, represent the true beginning of Dixon’s social commentary paintings.

Reflecting on his stay at Boulder Dam, Dixon wrote, “All these things merged in a sense of the tragedy of men’s labors; the great treadmill drama of lost endeavor—but in the long run, the desert will have the last laugh.”