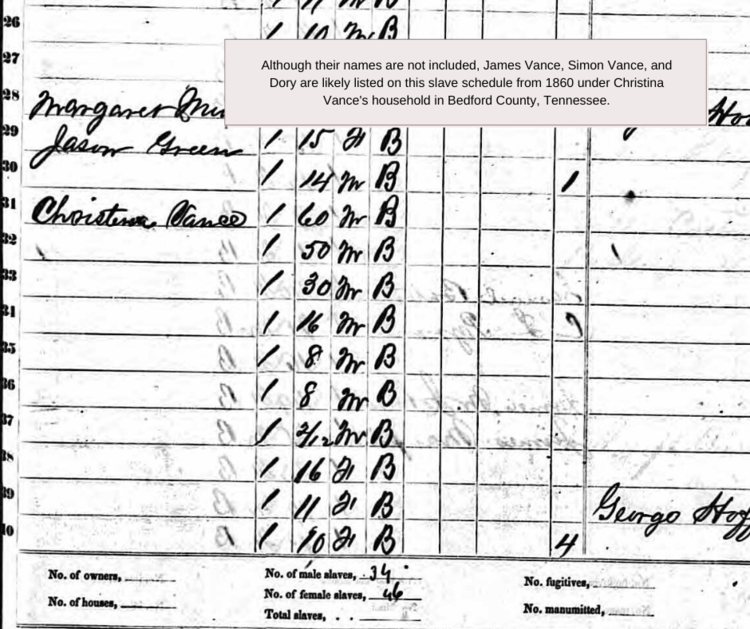 James lived on the Vances’ Reems Creek plantation and was willed to Samuel Vance, son of David Sr. and Priscilla, in 1813.  Because Samuel also inherited property in Tennessee, James likely moved there at this time.  James remained on Samuel Vance’s Bedford County plantation until he was emancipated in 1865. That same year, Samuel’s widow, Christina Weaver Vance, wrote in her will,

“My desire and request is that my old and faithful Servant Jim, a colored man, that if I should die before he Should, that my Executors shall take care for Jim and see that when he dies that he may be decently buried.”

A 77-year-old James Vance is listed in the 1870 census in Bedford County.  He was a blacksmith who could read and write, and was living with LB Vance, possibly his wife or daughter.  She listed her age as 48 and her profession as cook.  Like James, she could read and write.

Like James, Simon was also willed to Samuel Vance and moved with him to Bedford County, Tennessee.  Following emancipation, Simon lived in Coffee County Tennessee, bordering Bedford County to the east, with Vanna Vance--likely his wife—and a white man named Virgil Blanton.  Simon listed his profession as “domestic servant” and although he could read, he could not write.

Dory was also willed to Samuel Vance upon David Sr.’s death in 1813.  Like James and Simon, Dory probably moved to Samuel’s Tennessee property at this time.