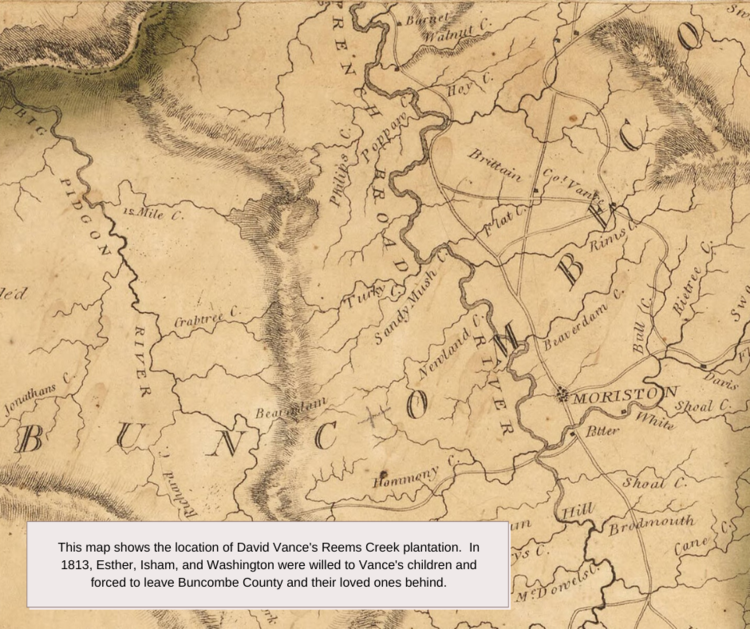 In his 1813 will, David Vance Sr. allowed his daughter, Celia Vance, to choose between Leah (II) and Esther.  Celia chose Esther and Leah remained with Priscilla Vance.  In 1817 Celia married Benjamin Brittain, a close neighbor of the Vances, and Esther likely traveled with her to the Brittains’ farm .  After 1822, the newlyweds moved west to Haywood County, then Macon County, and finally settled in Cherokee County.  This move would separate Esther from family and friends in the Reems Creek Valley.  Unfortunately, we do not know anything about Esther’s life after 1822.

Enslaved by David Vance Sr, Isham was willed to Priscilla Vance in 1813.  Upon Priscilla’s death in 1835, Isham was legally inherited by Celia Vance Brittain, although he was already living with the Brittains in Macon County at the time.  Like Esther, Isham was separated from family and friends each time Celia and Benjamin Brittain moved further west.

Like Isham, Washington was willed to Priscilla Vance by her husband, David Sr., in 1813.  Priscilla then gave Washington to her daughter, Elizabeth Vance Davidson, in 1835—although he was already living with Elizabeth’s family in Haywood County at this time.  He may have traveled with Elizabeth to Alabama and then Cherokee County, where she settled after her husband’s death.