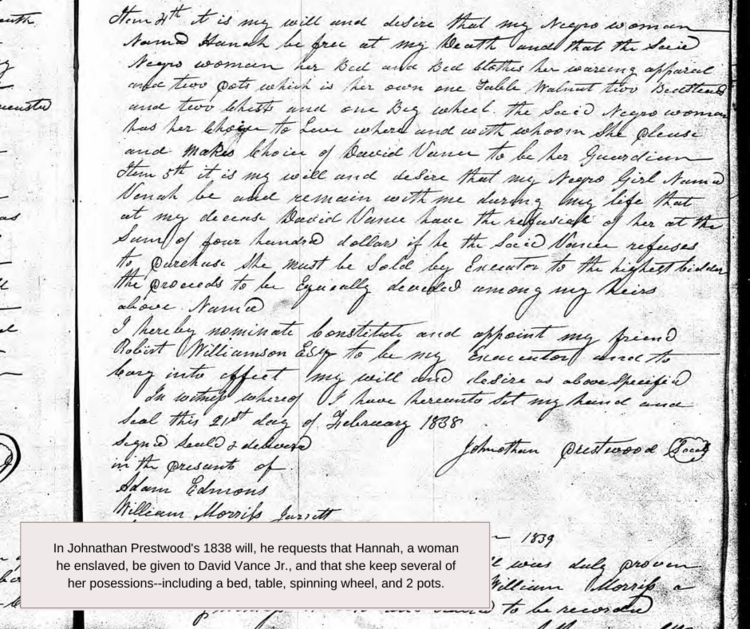 Hannah was enslaved by Johnathan Prestwood but was willed to David Vance Jr. in 1838.  In the will, Prestwood states,

I desire that my negro Hannah to be free at my death and the said negro to have her bed & her wearing apparel, two pots which is her own, one table walnut, two chests, one big wheel, said negro woman has her choice to live where & with whom she pleases and makes choice of David Vance as her guardian.

Like Richard, Aggy, Jo, and Leah, Hannah was not legally freed by her enslaver’s will.  However, she was allowed some choice in her new life and, unusually, was granted some property.  Because Hannah chose David Vance as her “guardian,” we believe that she had built relationships with the families enslaved by the Vances.  In fact, Aggy mentions Hannah specifically in her 1830 message to Jane, noting that she “has a fine son in her old days.”  This indicates strong bonds of friendship between Hannah, Aggy, and Jane.  It also suggests that Hannah was living on or near the Vances’ Reems Creek plantation before 1838.  She may have been loaned or hired out to David Jr. to provide extra labor on the farm.  Since  Hannah is described as “old” by Aggy in 1830, and since she does not appear in the records of the 1844 estate sale, she most likely passed away between 1838 and 1844.