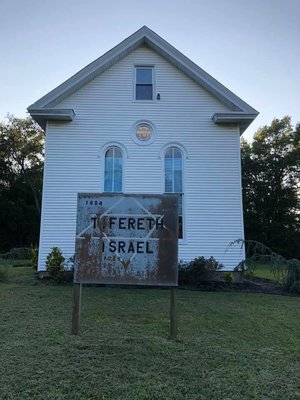 The Shearith Israel Synagogue in Alliance, NJ was built in 1889. The synagogue was one of four in the area during the late 1800s and early 1900s. In May 1882, 43 Jewish families that had fled the pogroms in Russian left New York and settled in Alliance. Over the course of the summer other Jews followed and by the end of the summer there were approximately 70 families living in the area. The towns of Alliance, Norma, and Brotmanville comprised what would come to be known as the Alliance Colony (currently part of Pittsgrove, NJ). The Jews were supported by France’s Alliance Israelite Universelle, an organization supported in part by Baron Maurice de Hirsch, which inspired the name of their settlement. They were also paid by HIAS. When they first arrived, the Jews lived in army tents that local politicians arranged as temporary housing. By 1901 there were 78 farms, 151 adults, and 345 children living in the Alliance Colony. The Jewish agricultural colonies of South Jersey experienced a resurgence with the arrival of Holocaust survivors, many of whom shifted from growing produce to chicken farming, but eventually these communities mostly faded away.