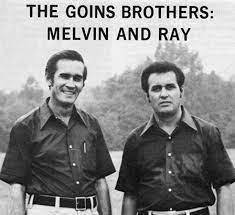 Melvin and Ray Goins were born on Sinai Mountain, near the coal mining community of Goodwill, WV. While growing up on their family’s farm near Bluefield, West Virginia, Melvin and his brother Ray worked the fields,
but on their lunch breaks, they would gather around the family’s battery-powered radio and listen to “Farm and Fun Time” on WCYB out of Bristol, Tennessee, which featured the best performers of the day.

The Goins’ also developed their love of music from their grandmother who played the organ at church and their cousin who played fiddle. Melvin traded his neighbor several chickens for his first old banjo, and before
he had a chance to play it, his brother Ray picked it up. Melvin immediately saw the skills that his brother possessed on Banjo and decided to go for a different instrument. A cousin of the Goins’ who was living with them gave Melvin his first guitar.

It was at age sixteen that Melvin had his first public performance, singing. There was a band contest in Bluefield, WV and he sang Flatt and Scruggs’ “I’m Gonna Settle Down”. This won him the first prize of ten
dollars.

In 1951, the Goins brothers played on a radio show on WKOY in Bluefield. Shortly after, Ezra Cline was looking for a banjo player for the Lonesome Pine Fiddlers. Ray auditioned and got the job in 1952 at age
sixteen. During this time, Melvin stayed home and played the local square dances. In late 1952, the Lonesome Pine Fiddlers decided to move to Detroit and Ray stayed home.

In 1953, the Goins Brothers joined Bernard Dillion and Joe Meadows and formed the Shenandoah Playboys. The band had a daily radio show on WHIS in Bluefield, and they played at dances on Saturdays. Later in 1953, Ezra Cline called the Goins and asked them both to be in the Lonesome Pine Fiddlers.

The work was steady, and the crowds were large. In 1955, Ray left the Lonesome Pine Fiddlers and some time later the Goins brothers went to work at WPRT in Prestonsburg, Ky. They also worked for a number of
television stations; this was a very busy time for the Goins brothers.

In May 1969, Ray and Melvin got back together, forming the Goins Brothers Band. In the first year the Goins would often play shows along side of Ralph Stanley and his band. Over the next thirty years the Goins
Brothers Band recorded around twenty albums.

In 1975, The Goins Brothershad another TV show on WKYH-TV in Hazard, KY.They had their Saturday morning show until 1994.

In 1994, Ray Goins experienced some health problems and he had to give up touring but he convinced Melvin to keep going. Since Ray had to leave the band Melvin decided to change its name to Melvin Goins and Windy Mountain which was one of the most popular songs that the Lonesome Pine Fiddlers recorded.

In 2005, The Goins brothers were included in a two-part documentary as part of the International Bluegrass Music Museum’s oral history project. In 2006, Melvin had to replace his banjo player, so he called Ray and
asked him if he would help until he found a replacement. Ray was back with him until October of that year. At the Kentucky Music Hall of Fame, we are grateful for the influence the Goins Brothers have had on bluegrass music around the world.