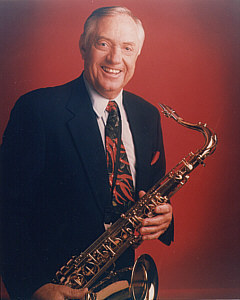 In 1927, Homer Louis Randolph was born in Paducah, Kentucky, and grew up in the rural area of Cadiz. Surrounded by a musical family, Homer, (or “Boots” as his brother called him), had many opportunities to explore his musical and creative talents. Boots played an array of instruments, but by the age of 16, he decided to focus his attention on the saxophone. While in the service he joined the Army Band, and later began working in a band with his brother. His unique style of sax playing caught the attention of friend and famed guitar player, Chet Atkins, who in 1958 helped Boots find work on Nashville recording sessions.

It was his trademark tune, “Yakety Sax” that launched his career and enabled Boots to move to Nashville, becoming one of the most sought after studio musicians in the business. He was the first to play sax on Elvis’s recordings and the only one to ever play solo with him. Boots played sax on eight of Elvis’s movie soundtracks, in addition to playing with other top artists such as Chet Atkins, Floyd Crammer, Johnny Cash, Richie Cole, and Tommy Newsom, just to name a few.

Boots had a major impact on the use of the sax in pop and country albums making his own style a major part of the overall Nashville Sound. He has had over 40 albums on the Monument Label. In 1966, he earned a Gold Record for his recordings with the Knightbridge Strings, which featured the song, “The Shadow of Your Smile.” His sax playing can be found on many other gold records as well, including “Honey In the Horn”, “Java”, and “Cotton” by Al Hirt, along with numerous consecutive Gold Records by Elvis.

Boots Randolph also had hit singles with “Hey, Mr. Sax Man” and “Temptation.” For 15 years he toured with Chet Atkins and Floyd Cramer, and later played with them on the Hee Haw TV Show, as the house group known as the “Million Dollar Band” which also featured Danny Davis, Roy Clark, Jethro Burns, Johnny Gimble, and Charlie McCoy. Other shows to his credit include the Ed Sullivan Show, and the Tonight Show, with Johnny Carson. Boots has toured Europe and headlined jazz festivals and conventions all over the country.