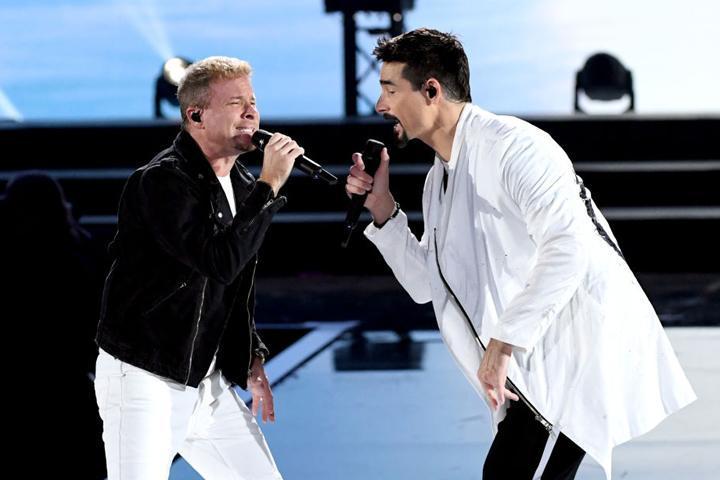 Brian Littrell and Kevin Richardson are leading members of one of the best-selling vocal groups in the history of the music industry. Their group, The Backstreet Boys, have sold over 130 million albums to date, and are one of only two groups ever, to see their release of seven consecutive albums reach the top 10 of the Billboard’s Top 200. Multiple awards, sold out concerts and millions of albums sold have made these two young men from Kentucky, international music superstars!

Cousins Brian and Kevin grew up in Central Kentucky and sang together in local church choirs and festivals; the two formed a strong bond and a lasting friendship at a young age. Brian Thomas Littrell was born in Lexington, Kentucky on February 20, 1975. He began singing publicly at Porter Memorial Baptist Church in Lexington and attended Tates Creek High School. Kevin Scott Richardson is the youngest of three brothers and was born October 3, 1971, also in Lexington. His family moved to Irvine, Kentucky where Kevin played football and began performing in school plays. He graduated from Estill County High School.

In 1990, Kevin moved to Orlando, Florida and worked as the cast member “Aladdin” at Walt Disney World.While there, Richardson answered an ad in the Orlando Sentinel, auditioned and was selected to be a part of a new area boy-band. In need of an additional singer to fill out the group, Kevin encouraged a call to his cousin Brian in Kentucky for an audition. Brian was a junior in high school at the time and was called out of a math class when the offer to join the band was made. The next day Brian flew to Orlando and the group The Backstreet Boys was formed.

On May 8, 1993 at Sea World Orlando, Brian and Kevin performed as members of the Backstreet Boys for the first time. Over the next year and a half the band traveled across the country playing in shopping malls, restaurants and at local high schools. In 1995, the band flew to Sweden and recorded “We’ve Got It Goin’ On.” It was the group’s first single release and the pop tune soon entered the top 5 on the charts in Germany, Switzerland, Austria, France and the Netherlands. With the international release of their first album, self-titled, “Backstreet Boys,” the band enjoyed success abroad and was voted the top group in Germany in 1996. Then, in May of 1997, “Quit Playin’ Games With My Heart,” was released in the states and climbed the charts to the number two position on the Billboard Hot 100.

Their first album release in the states, also titled, “Backstreet Boys,” included songs from their first international release as well as their second album release, “Backstreet’s Back.” The album rose to number 4 on the U.S. album charts and eventually sold over 14 million copies!

In 1998, The Backstreet Boys were recognized with numerous awards, including The 1998 Group Album of the Year at the Billboard Awards, People’s Choice Favorite International Group Award at the Much Music Video Awards, Best Group Video at the MTV Video Music Awards and World’s Best-Selling Dance Artist at the World Music Awards.

The single, “I Want It That Way,” was the first release of the Backstreet Boys third album, Millennium. This single rose to number 1 in over twenty-five countries worldwide. When Millennium was released on May 18, 1999, it entered the Billboard Top 200 at #1 and set a record for first-week sales in the U.S with over 1.1 million copies sold! Millennium became the best selling album of 1999 and while on the Millennium tour, the boys packed the Atlanta Georgia Dome with more than 85,000 adoring fans; a record crowd that remains the largest crowd ever to attend a concert by a pop artist group! More awards followed – 1999 Billboard Music Awards Artist of the Year, Album of the Year, Album Artist of the Year and Album Artist Duo/Group of the Year, Favorite Pop/Rock Band, Duo or Group at the American Music awards and still, in 1999, the group received their first Grammy nomination for Best New Artist.

Through 2006, The Backstreet Boys continued to tour the world and promote albums as tens of thousands of fans filled stadiums in Stockholm, Tokyo, Sydney, Cape Town, Rio and New York City. The Band accumulated multiple distinguished music awards during this period. Their world-wide popularity led the NFL to bestow the honor on the group to perform the National Anthem at the Super Bowl in Tampa, Florida.

In late 2006, Kevin announced he was leaving the band to pursue other career interests. During his time away from the band Kevin enjoyed success as an actor, a model and composed the soundtrack for a feature animated film. During this time the Backstreet Boys continued to produce albums and tour the world - Brian also stepped out on his own to produce the solo Christian album, “Welcome Home;” it rose to number three on the Christian charts.

Kevin officially returned to the Backstreet Boys during a show in London on April 29, 2012. The band continues to work on a number of projects including their recently released documentary movie, “Backstreet Boys: Show ‘Em What You’re Made Of."

With their pure vocal harmonies, Kevin and Brian, as members of the Backstreet Boys, have established themselves as one of the most successful vocal group bands in history; they have performed in front of Kings and Queens, The President of the United States, sang the National Anthem at the Super Bowl, enjoyed record attendance at their concerts all over the world and smashed records for albums sold. They have been honored with a star on the Hollywood Walk of Fame and are positioned for continued success with exciting new projects on the way.

Kevin Richardson and Brian Littrell have truly made an everlasting, permanent mark on the history of the entire music industry.