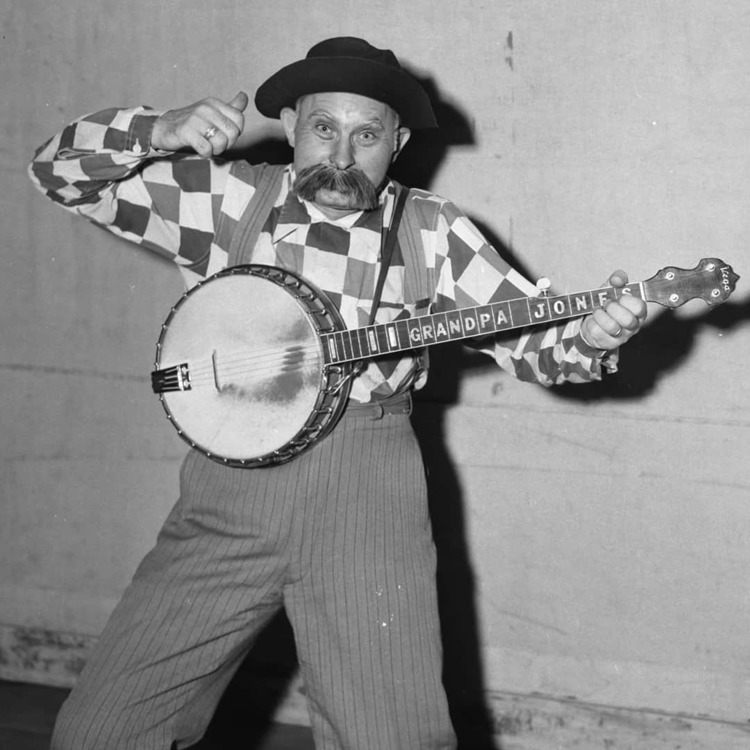 Country Singer, Comedian, Banjo. Jones was the youngest of 10 children of sharecropping parents who performed music locally. He began on radio as “the young singer of old songs” at a very early age, but received his famous nickname in 1935 while touring with Bradley Kincaid, who maintained that he sounded like a grumpy old man; hence he became “Grandpa” at age 22.

While working on a radio station in West Virginia, he met felloe Kentuckian “Cousin Emmy”, who taught him to play the banjo in her exuberant frailing style, and the banjo became his primary instrument. Moving on to WLW in Cincinnati, he was part of one of the great gospel quartets, The Brown’s Ferry Four with the Delmore Brothers and Merle Travis. Jones moved to Nashville in 1946 where he played with Pee Wee King’s Band on the Opry and became a member of the Grand Ole Opry in 1959.

He was part of the original cast of the popular network television show Hee Haw, which made him a household name, especially with his “What’s for dinner, Grandpa,” which he wrote. He was also a composer of songs; Eight More Miles to Louisville and the gospel standard Falling Leaves were two of the most popular. He was elected to the Country Music Hall of Fame in 1978.