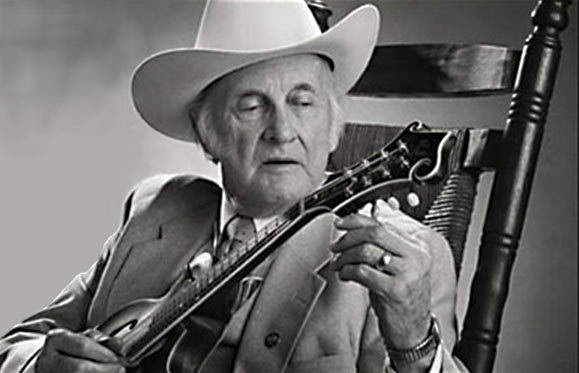 “Father of Bluegrass”, Mandolin, Singer, Songwriter. Was credited with developing and perfecting the Bluegrass music form and taught it to many great names in the industry including his protégés Lester Flat and Earl Scruggs. A descendant of the fifth president of the United States, Monroe began to concentrate on the mandolin at age nine because no family member played that instrument.

In 1932, the three Monroe Brothers toured for WLS in Chicago. In the mid-30’s he and his brother Charlie toured as the Monroe Brothers and recorded for RCA-Victor. In 1939, Monroe made his first appearance on the Grand Ole Opry. He and Charlie split and Monroe formed his first band, the Kentuckians, and then the Bluegrass Boys in the 40’s. It was the leading influence of Monroe’s driving mandolin and his high tenor voice that set the Bluegrass Boys apart. It was while Flat and Scruggs were with the band that Monroe first recorded his now immortal song Blue Moon of Kentucky. During the 40’s, Monroe toured with his tent show, which included his famous baseball team, and David “Stringbean” Akeman, who provided comedy and banjo playing. In 1974, he was elected to the Country Music Hall of Fame and in 1989 celebrated his 50th year as a member of the Grand Ole Opry.