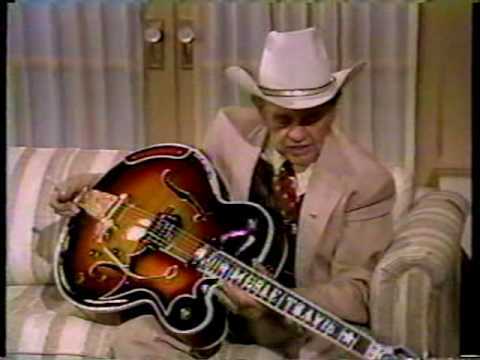 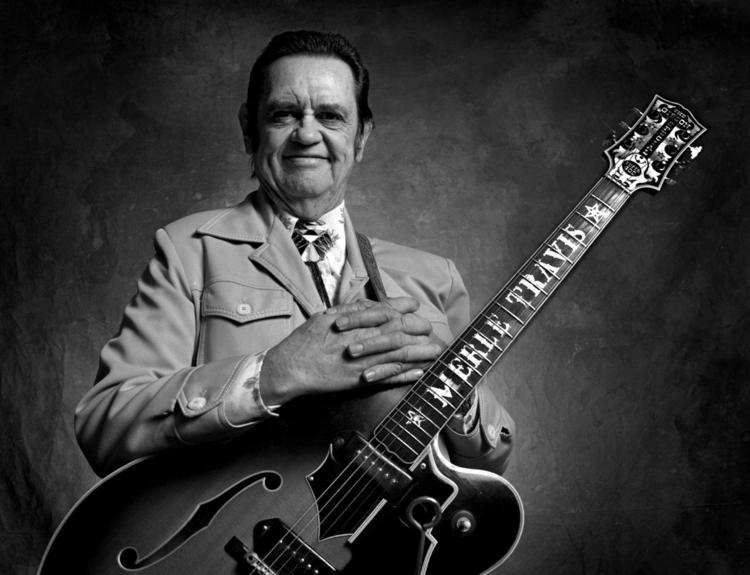 Guitar Stylist, Singer, Songwriter. The son of a tobacco farmer and coal miner, he got his start in 1935 when he joined the Tennessee Tomcats and from there the Georgia Wildcats and the Drifting Pioneers. He and Grandpa Jones did many radio shows together and recorded as the Shepard Brothers.

He co-wrote Capitol’s first million-seller, Smoke, Smoke, Smoke That Cigarette with Tex Williams, and his Folk Songs of Our Hills included Nine Pound Hammer, Dark As A Dungeon and Sixteen Tons. He won acclaim for his portrayal of a young GI in the 1954 film From Here To Eternity, in which he sang Re-enlistment Blues. He was also one of the Texas Playboys in the Clint Eastwood Film, Honkytonk Man. Travis’s Walkin’ The Strings is a highly-regarded album of acoustic guitar solos. In 1948 he developed the solid-body guitar. He was elected to the Country Music Hall of Fame in 1977.

In Merle's exhibit are his Nudie Shirt, signature Stetson hat, and signature Gibson Super 400 guitar. This guitar was special made for Merle and was the inspiration behind him developing the solid body guitar to eliminate feedback from his instrument. This is the guitar featured in his picture above.

Interesting note about this guitar: You will notice a small metal bracket on the left side of the neck that is parallel to the guitars neck. This bracket was used to hold Merle's pocket watch so that he could see the time without looking at his wrist while in front of an audience.